World-renowned Irish musicians Winifred Horan, Mick McAuley and Colm O’Caoimh will present concerts, workshops and lessons at Cedarville University Nov. 16 and 17. They will perform in the Dixon Ministry Center Recital Hall at noon on Friday and join students and local musicians for an Irish session at Beans-N-Cream at 8 p.m. On Saturday, the trio will present a concert at the Cedarville Opera House at 8 p.m.

Horan and McAuley are longtime members of the internationally acclaimed Irish band Solas, which the Boston Herald called “the best traditional band in the world.” Guitarist O’Caoimh is a founding member of the rising band Caladh Nua.

Horan, one of the world’s most celebrated Irish fiddlers, comes to Cedarville for the second time. Last November, she performed, coached, and played a session with students in John Mortensen’s traditional Irish music classes. Mortensen, a professor of music, said Cedarville is the first university in America to offer a college-level course in traditional Irish session music.

Senior Julia Hodecker, who accompanied Horan with Cedarville’s traditional Irish-American band, the Demerits, said she is most excited to hear Horan play again. “She has so much vibrant energy onstage,” Hodecker said. “Her musicianship is incredible." Mortensen said the trio’s performances and workshops will be the most exciting folk music event on campus this year. “You don’t need to have studied to enjoy Irish music,” he said. “It will reach out and grab you.”

There is no charge for tickets to any of the performances, although there will be a suggested donation for the concert. 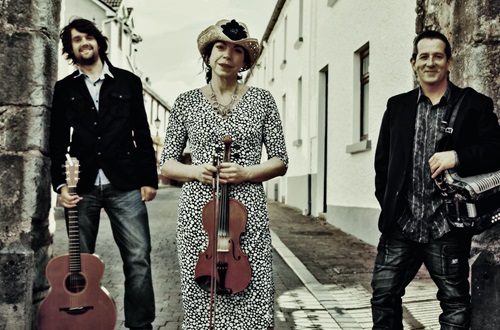