The Center for Bioethics is pleased to announce its new Academy of Fellows, six members of the Cedarville faculty from a variety of disciplines, working together with director Dennis Sullivan, M.D., professor of biology, to engage contemporary bioethics issues.

Sharon Christman, Ph.D., serves as a professor of nursing. She received her Ph.D. from The Ohio State University in 2001, and has been teaching at Cedarville since 1997. Her particular areas of interest are cardiovascular nursing and evidence-based nursing practice.

Charles Dolph, Ph.D., serves as professor of psychology. He heads the psychology internship program and is the advisor to Psi Kappa Theta, the student psychology club. He received his Ph.D. from Georgia State University in 1982 and has taught at Cedarville since 1979. His primary interests are spiritual and social contributors to health and illness. Dolph works with long-term care facilities and hospices to meet the psychological needs of ill and dying people.

Shawn Graves, Ph.D., serves as assistant professor of philosophy. He received his Ph.D. in philosophy from the University of Rochester in 2010 and has been at Cedarville since 2007. His research interests include theories of epistemic justification, the effect of disagreement on the epistemic justification of one’s beliefs, philosophical theology, the concept of personhood, the nature of moral perfection, consequentialist theories of morally permissible action, consumerism and moral complicity, animal ethics and the ethics of killing (particularly at the margins of human life).

Elisha Injeti, Ph.D., serves as director for research and development at the Cedarville University School of Pharmacy. He taught pharmacology and physiology at St. John’s Pharmacy College in Bangalore, India, before receiving his Ph.D. in pharmacology from Loma Linda University in California. His research interests, of which he has several publications, include vascular pharmacology, drug interactions, and pharmacokinetics. He is actively involved in engaging current bioethical issues from a Christian world view.

Heather Kuruvilla, Ph.D., serves as professor of biology. She received her Ph.D. in biological sciences from the State University of New York at Buffalo in 1997. She is a member of the American Society for Cell Biology, where she presents data at their annual conference and serves on the Congressional Liaison Committee. Kuruvilla and her students continue to publish scientific articles and abstracts on aspects of chemorepellent signaling in tetrahymena.

Jeffrey Lewis, Pharm.D., serves as associate dean of the Cedarville University School of Pharmacy. He received his Doctor of Pharmacy from the University of Cincinnati. After completing a specialized residency in hospital pharmacy administration at the Medical College of Virginia Hospitals, he returned to Ohio to assume the role of manager of clinical pharmacy services at Summa Health System in Akron. While there, Lewis was responsible for developing and maintaining many of the systems and processes that affect quality institutional drug use. Through this work he developed a special interest and expertise in medication error reduction strategies.

Under the leadership of Sullivan, these six new fellows will work to conduct research, promote discussion and engage scholars on the vital bioethics of the day. 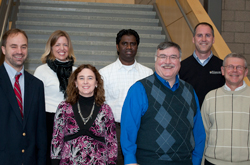 The Cedarville University Center for Bioethics is pleased to announce its new Academy of Fellows.