Growing from a small college with 32 students on 12 acres of land on its first day to a university of 3,300 students on 400 acres of land, Cedarville University has navigated through the past 125 years only through the grace and faithfulness of God. Two critical events show the providence that allowed Cedarville College to even have a chance to last beyond a good idea.

From the start there were difficulties as the founders had trouble securing the necessary funds to get the school started.

“By 1891 they hadn’t gotten enough money and so they decided to just stop, to end the whole enterprise and send back what little money they had received,” Lynn Brock, Cedarville University archivist, said. The synod of the church that had commissioned the school would not allow the founders to give up on the project. “It almost died but it was just barely on life support,” he said.

Then, out of nowhere, life was breathed into the school.

In 1892 the founders of the school got news of a bequest from an estate: William Gibson in Cincinnati. “He had given the college $25,000 in honor of his father. So that $25,000 bequest put everything back on the table.”

The second critical event in the history of Cedarville University happened in the mid-20th century. “By 1953 they were ready to close the place,” Brock said. “They were going to close in the spring of 1953 because they couldn’t find any college to merge with and nobody was willing to take on the debt.” According to Brock, poor leadership led to debt problems, which on top of low enrollment during World War II, nearly forced the College to close its doors.

But then, just as in 1892, life was breathed back into the school.

These two miraculous events show God’s provision throughout the last 125 years of the school’s history. “Those are the two critical moments, once when the dream almost died and once when the college literally almost died,” Brock said. “In both situations you can say a miraculous situation occurred.”

Nine presidents have served Cedarville throughout the last 125 years, each bringing a unique style of leadership throughout that time. A brief look at four of those men reveals the leadership typically exemplified by those who held the position of president.

Cedarville’s first president, Dr. David McKinney, set the standard for all the presidents of the school to follow. “The History of Cedarville College,” published in 1966, gives a sense of the prosperity the school found under McKinney: “He assumed leadership of an organization that had only a charter and a piece of bare land, and left it a thriving college, free of debt, with three substantial buildings, a dedicated faculty, loyal alumni and an increasing number of faithful supporters.”

McKinney steered the school through the numerous challenges involved in opening the school.

According to Brock, a struggling college with 100 students needed a “pastor president.” This was Dr. James Jeremiah. “That’s what Jeremiah was, he was a pastor initially,” he said. “He had to mentor this place and pastor this place, and get people to support it and raise money. So he was what I call the ‘pastor president.’”

Next came Dr. Paul Dixon, whom Brock calls the “CEO president.” “We needed someone who would move in corporate circles and build in maturity. He was very business oriented. He still had an evangelistic heart because that’s what he wanted this place to be, but he used a little bit different mode of operation than Dr. Jeremiah.”

And then most recently, Dr. William Brown, whom Brock calls the “scholar president”: “He brings an academic background now that the place has matured physically and structurally. With Dr. Brown, we’re in pretty significant transitions right now moving from an almost exclusively undergraduate institution to having graduate and online courses.”

Each of these men came at a time when the school needed different qualities of leadership. God’s provision of leadership throughout this time is unmistakable.

Cedarville University has stood for the same principles throughout the 125 years it has existed. It has existed to train young men and women to be gifted individuals in their fields of study, all the while learning about the God who placed them where He did. While challenges almost certainly await Cedarville University on the horizon, the history of the school speaks well to its future. 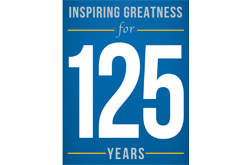 For 125 years Cedarville University has existed to train young men and women to be gifted in their fields of study, while learning about the God who placed them where He did.