A Cedarville team placed first in Ohio at the 2012 ACM International Collegiate Programming Contest on Nov. 3. The group of computer science students competed against 130 other teams from 63 colleges and universities throughout the region, which includes western Pennsylvania, Ohio, Michigan, eastern Ontario and Indiana.

Professor of computer science David Gallagher said the five-hour competition both demonstrates and sharpens students’ problem-solving skills. “Every school in the region competes in this,” Gallagher said. “To come in the top ten in this competition is pretty tough.”

Junior Matt Schoenwald of Ohio said the contest challenges students to work as a team. Danny Andrews, a junior from Illinois, said the competition also fosters skills he found valuable in his internship with Logos Bible Software.  “It’s good to be able to think quickly, on your feet,” Andrews said. 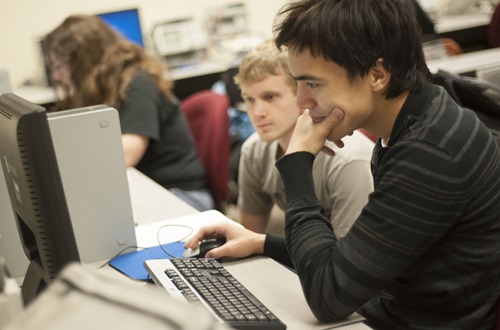