Jay Kinsinger, assistant professor of mechanical engineering, has always been a bike lover. He found the perfect marriage of his engineering skills and interest in cycling when, as a teenager, he built his first bicycle. The fact that it was a flop didn’t stop him.

Today, Kinsinger and his family share this love of cycling. “It became my personal challenge to involve my whole family in bicycling from the very beginning,” he said. “I built special bicycle trailers that would accommodate infant car seats, trail-a-bikes, kid-friendly tandems and a triplet (bicycle built for three). All four of our kids passed through the ranks of my various contraptions. We pedaled club rides as a family and made fantastic memories touring self-supported in the Midwest, the Pacific Northwest and New England.”

It’s no surprise, then, that when they decided to do a bicycle tour of Europe this past summer, Kinsinger built bicycles for the family. These new bikes were created out of wood, and were engineered in such a way that they could fold down to fit into suitcases to save on bag checking fees. The eventful trip was chronicled in the family’s blog, bikeeurope.

Recently, Kinsinger entered one of his bicycles in the Dayton Carvers Guild's annual Artistry in Wood (AIW) show. The show touts itself as the largest woodworking show in the nation.

“When I wheeled my bike into the judging area, all my hopes and expectations of winning a prize were dashed as I surveyed all the incredible work that I was up against,” said Kinsinger. However, his unique bicycle stood out among the other woodwork. He walked away from the competition with three blue ribbons: first in category, first in class and best of show.

Kinsinger hopes to continue to enter his bicycles in woodworking and bicycle shows. “I continue to perfect my process and will most likely enter AIW next year,” he said. “I really want to simply ride them and teach others how to build them." 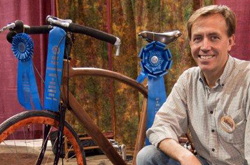