Cedarville University’s Elmer W. Engstrom Department of Engineering and Computer Science continues to demonstrate excellence in innovation and development as evidenced by their involvement with the DONG Energy Solar Challenge in the Netherlands from July 8-14, 2012.

The Solar Challenge, unofficially known as the World Cup for Solar Powered Boats, began holding competitions in 2006. Cedarville engineering students competed in Class A in 2006 and successfully won second place in the challenge. Class A is the competition with single drivers, Class B has two drivers and the Top Class competitors construct and navigate larger and faster boats during the competition. This July, the team will compete in the Top Class competition, the highest tier of competition. The Solar Challenge is not limited to collegiate teams, and students will compete against top scholastic and industrial solar boat teams mainly from Europe.

Dewhurst said that Cedarville is able to gain an international presence and reputation in engineering through international solar boat competitions.

“We have been extremely blessed in this project in what we've been able to produce, awards we have garnered and by how God has provided through money that has been donated, equipment and supplies that have been provided and technical expertise that those outside the University have shared,” Dewhurst said.

Yeh said that this competition has given him confidence in his ability to approach engineering problems and develop a feasible solution while representing Cedarville.

“I've appreciated the opportunity to work on a project that will not only represent Cedarville, but also the U.S. at the competition in the Netherlands,” Yeh said.

Kirsten Nicolaisen, a member of the team, said that being part of the team, taking design concepts and figuring out how to make them work logistically has been an awesome integration of what she’s learned throughout her time in the engineering program.

“We hope to bring glory to God in all that we do,” Nicolaisen said. “Yes, we are engineering students working on a project, but it has been an incredible experience for me to see how I can worship and bring glory to God through my work on the solar boat team. I believe that this is a great integration of work and faith.”

Cedarville’s engineers have demonstrated the University’s leadership in solar energy development through its success at other competitions. Cedarville’s team has won six first-place awards in the Solar Splash World Championship since 2004. The Solar Splash competition is an international competition held annually in the U.S. and is unrelated to the DONG Energy Challenge. The teams also won awards competing in Class A of the Frisian Solar Challenge in 2006, which is a six-day test of endurance against some of Europe’s finest universities, corporations and boat makers. 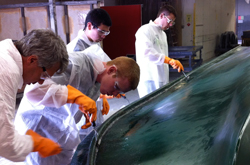 Cedarville University’s solar boat team will travel to the Netherlands to compete among multiple international schools at the DONG Energy Solar Boat Challenge in July 2012.