Student Gives Back Through Robotics Competition

Cedarville University hosted  a VEX Robotics Competition in early February. VEX gives students an opportunity to learn about careers in science, technology, engineering and math-related fields. Students learn about these opportunities through teams that incorporate principles from STEM fields. The story behind Cedarville’s competition lies with junior Julia Thompson.

Thompson became involved with robotics in 2004 when her dad began coaching a Lego robotics team in her hometown as an opportunity for homeschooled students to develop in the areas of math, science and engineering. In 2006 when Thompson and her friends aged out of Lego robotics, her dad started a high school level VEX competition team.

“I know the impact being involved with robotics had on me, and I want to give other students the same opportunity,” Thompson said. This is why she along with Vicky Fang, Ph.D. and three Cedarville seniors worked to plan a VEX competition.

A VEX competition starts with qualification rounds. During this time a computer randomly generates teams of two. After all teams complete six qualification rounds, the teams are ranked by wins and losses. The top eight teams select two other teams to join their “alliance.” This alliance works together for the remainder of the competition. After the elimination rounds are completed, the last alliance remaining is crowned the tournament champion.

Twenty-four teams arrived and 22 entered the elimination rounds. “I enjoyed watching the students enjoy something that the alumni of the program were able to organize for them,” Thompson said.

“Hosting a competition is a lot of work, but it is totally worth it,” Thompson said. “The influence my engineering mentors had on me in high school is beyond measurable. Volunteers worked hundreds, if not thousands, of hours to provide me with a place to compete.”

According to Fang, the faculty advisor for the project, the VEX Robotics Competition is the largest and fastest growing middle and high school robotics program globally with more than 3,500 teams from 20 countries playing in over 250 tournaments worldwide. Cedarville received funding from the Ohio Space Grant Consortium for the competition.

Ultimately Thompson wanted to give back in a way that others did for her. “After competing for many years in high school, I wanted to help continue the influence of robotics to the next group of high school students,” she said. “By working with Cedarville University, I have been able to bring about 125 high school students to our campus who may never have come here otherwise. I pray that we will not only be able to influence their career choice but also show them Christ.” 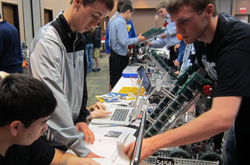