Three environmental science students helped clean a whale skeleton for use by the Smithsonian Institution while studying on Whidbey Island this summer.

Christian Hayes, Amelia Lyons, and Nathan Reed were studying marine mammals at Au Sable Institute’s Pacific Northwest campus in Washington when they were invited to help clean the skeleton of a gray whale that had been found dead in April. Scientists had towed the whale to the Whidbey Island Naval Air Station and cleaned the skeleton as much as possible, then left the bones in the water until summer.

This unexpected opportunity became one of the students’ most memorable experiences of the summer. They spent a long day rolling the whale’s skull off the beach, dragging bones from under the dock and removing the barnacles that covered them. “It was very surreal,” said Hayes, a senior from Washington. “When you pick up a jawbone that’s bigger than you are… it makes you feel really small. They’re remarkably light, actually.”

At the end of the day, the students were covered in blubber and reeked of decayed whale flesh, but they had barrels of clean vertebrae ready for the Smithsonian. “It was a crazy experience,” said Lyons, a senior from Pennsylvania. “It was really cool to be contributing to the body of scientific knowledge in the U.S.”

Reed, a senior who comes to Cedarville from North Carolina, said whale watching and seeing the unique landscape were also highlights of studying at Au Sable. “You get to see so many aspects of creation,” he said.

Assistant professor of biology Mark Gathany said Cedarville’s partnership with Au Sable allows the University to offer a broader curriculum for its science programs, as well as opportunities for students to build their resumes. The Institute also offers courses in Michigan and travel studies in India and Costa Rica. “It affords our students exposure to opportunities in science while learning to appreciate the wonders of creation and our responsibility to care for it,” Gathany said. “And we don’t have whales in Ohio.” 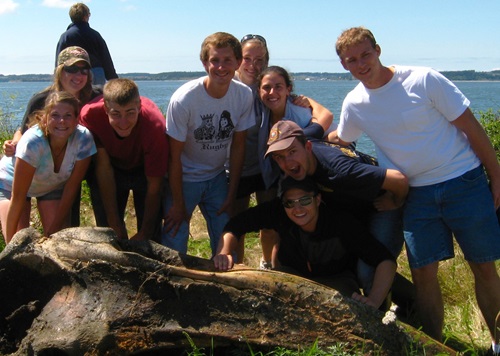 Three environmental science students helped clean a whale skeleton for use by the Smithsonian Institution while studying on Whidbey Island this summer. Photo courtesy of Amelia Lyons.