With a vision for increasing Cedarville University's national awareness, Mark Weinstein has become the executive director of public relations. He replaced John Davis, who accepted a position in the University's Human Resources office, on July 1.

For the majority of the past 24 years, Weinstein has held leadership positions in public relations in higher education. The past three years he’s led Cedarville’s admissions team to its largest enrollments in school history. But it is his passion for communicating Cedarville’s stories through various methods that brings him back to PR.

In his new role as executive director of public relations, Weinstein is charged with building on the strong public relations foundation at the University while developing new media relationships, engaging faculty as content experts and seeking opportunities for Cedarville to have a place on the national stage.

These goals have been accomplished at each of his previous universities in Pittsburgh and St. Louis, and Janice Supplee, vice president for enrollment management and marketing, believes the story will repeat itself at Cedarville.

“The University’s Vision 2020 includes the goal of increasing the national reputation of the University,” said Supplee. “This will happen through new academic programs, partnerships, relationships and critical concern conferences like the G92 Immigration Conference Cedarville hosted last fall. PR will be a key part of this effort, connecting what is happening on campus with community, regional and national audiences.”

During Weinstein’s six years at Robert Morris University (RMU), enrollment increased and the University’s image was strengthened at the Pittsburgh school. According to Jennifer Roupe, director of communications at Shady Side Academy in Pittsburgh who served with Weinstein as RMU’s associate director of public relations, the biggest success under Weinstein’s leadership was the transition from college to university status.

“He expertly led a large multi-department group of people in every aspect of this sizeable transition, from developing a new logo and graphic identity to launching a successful advertising campaign, from planning a huge launch event for the community to ensuring that the school’s new name appeared on every piece of literature, stationery and signage,” Roupe said. “Mark is a fantastic public relations professional, adept at building positive relationships, extremely dedicated to his job and constantly thinking of new ways to promote his university. His background in enrollment management and marketing are also great advantages for Cedarville.”

While at Maryville University in St. Louis, Weinstein duplicated his success in Pittsburgh by leading Maryville through identity challenges and crises. Today, Maryville University’s enrollment and image continues to grow because of the foundation built by Weinstein and his team. These experiences helped define Weinstein’s professional philosophy and strategies in public relations.

“I have learned the importance of developing a team that works well together, striving for clear communication, and being focused at work,” said Weinstein. “Any success that I’ve experienced is the result of working with good people, strong teams and being proactive whenever possible. Taking the lead always sets organizations apart from each other.”

A new chapter of Cedarville University public relations has begun. It’s an important period for the University, and Weinstein is focused on seeing Vision 2020 come to fruition.

“When my time has come to a conclusion at Cedarville University, I want the University to have a national presence in Christian higher education,” said Weinstein. “I want to see that the Vision 2020 strategic plan has been met by the public relations team and that Cedarville’s purpose is making a significant impact in our world to the glory of God.” 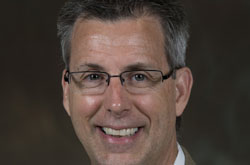