A  team of 13 engineering students entered robots in the American Society of Engineering Education (ASEE) Autonomous Robot Competition, held in June 2012 in San Antonio, Texas. Focusing their efforts on speed and reliability, the team named their robots “Coyote” and “Road Runner” after the fast-chasing cartoon characters. The team had a big challenge to meet for the competition. They would have to design a robot that would carry a golf ball (signifying a mail bag used by the pony express) around an 8 x 8-foot curving track with both a white line on a black floor and a black line on a white floor. It would then have to hand off the golf ball to the second robot, which would continue around the same track. A round is complete when the robots have run four laps, two by each robot, with three hand-offs in between.

The team knew early on that it needed to work on speeding up the robot from previous years. In 2011, Cedarville’s team earned fourth place with a track time of 25 seconds. The first place team had a time of 9.5 seconds, so they knew they would have to increase their speed in order to win. The 2012 team did just that. With significant changes to the drive train and motor control systems, along with some great programming and a software proportional and derivative control algorithm, the team’s robot completed a single lap in about 9 seconds, more than two and a half times faster than the previous year. A conveyor  belt lift system and spring-loaded delivery mechanism to a large hopper allowed the robots to transfer the ball safely with significant miss aliment, and faster than any other team in the competition.

The team designed a custom-printed circuit board to house the needed electronics and provide the connections, sensors, logic, and a socket for the motor controllers.  This compact design kept things neat, light, and reliable.

Because the overall team score was the sum of four independent  runs, reliability was a high priority. Coyote and Road Runner performed well in competition, correctly functioning in three of the four rounds. In the first round, the receiving robot had its lift paddle in the wrong spot and was unable to receive the pass from the lead robot. Although this was disappointing, other teams had similar issues. Cedarville’s robot pair ended with the third fastest time and won the third place prize in the competition. 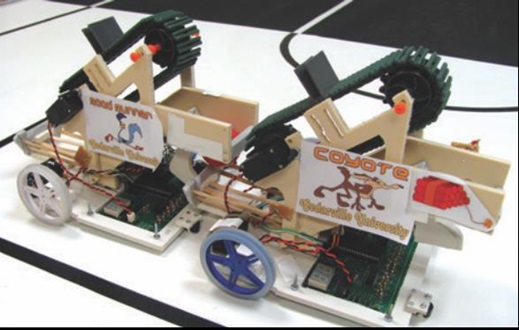