Cedarville University recently completed a renovation of the Fine Arts Center in midtown Cedarville. The department of art, design and theatre uses the building as the main studio facility for art and design majors.

The building was originally constructed as a Carnegie Library, named for Andrew Carnegie who donated more than $40 million to build libraries across the country. The town of Cedarville was no exception. The University’s first president, Dr. David McKinney, and prominent Cedarville resident, Whitelaw Reid, requested funds for the library that would be used by both the college and the town. Carnegie matched the money raised by McKinney and the college, and the town agreed to donate books and magazines.

Later, after the public library and college collections separated, the town moved the public collection to a separate building, and Cedarville College moved its library to an on-campus building. Since then, the building has housed classrooms, offices, and studios.

The building, later dubbed the Fine Arts Center, had been due for a renovation. The remodel removed extra walls and improved the building’s reception to natural light, a change particularly important for artists.

“The renovations encourage efficiency and quality work, which in turn encourages students to spend more time working on projects outside of class,” describes junior Jennifer Ward. “I now enjoy being in Fine Arts and look forward to my time there.”

Sophomore Alex Esbenshade adds, “It gives us art majors a kind of hub where we can be around other art majors and professors.”

The renovators wanted to maintain the historical integrity of the building, so they have concentrated on restoring the building rather than completely modernizing. It does, however, have contemporary amenities and a group of grateful students. 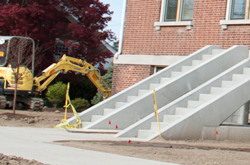 Cedarville University completed the renovation of the Fine Arts Center while maintaining the integrity of the historic building.