Global Expertise in a Small Town

Real-world experience infuses the department of history and government at Cedarville University. Frank Jenista, Ph.D., professor of international studies, brings his extensive experience as a United States diplomat to the classroom.

Jenista, son of missionary parents, grew up in the Philippines. When he came to Cedarville as a student, his background inspired his choice to pursue Asian studies. The University, however, did not have an Asian studies program at the time. One of the benefits of this Christian college is the dedication of faculty members. Jenista’s professors created a variety of reading courses, seminars and independent study programs so that he could pursue his dreams. When he started his master’s degree in Asian history at the University of Dayton, he found that he was well-prepared for the next part of his education.

He continued to the University of Michigan for his doctorate in Asian studies and conducted his dissertation research in the Philippines. While he was there, he met diplomats from the U.S. Embassy and, after talking to them, experienced a “light bulb moment.”  He completed the extensive application process for the U.S. Department of State and was subsequently selected as one of America’s foreign service officers. He worked as a U.S. diplomat for 25 years.

During his career, Jenista traveled worldwide with his first assignment in Japan, followed by assignments in Indonesia, New Zealand and “back home” in the Philippines. He also served in Washington, D.C. and Latin America.

During one of his assignments in the Philippines, Jenista watched the Filipinos overthrow President Ferdinand Marcos, a dictator who instituted martial law 15 years earlier, in the first of the world’s “People Power” revolutions. The Filipino people who gathered in opposition to Marcos rejected the option of a bloody, Communist revolution because they simply wanted their democracy back. The success of the revolution, Jenista said, was not through battles or a civil war but by “ordinary people gathering in huge numbers and saying ‘We aren’t going to do this anymore.’ That was one of the most meaningful moments of being an American diplomat – being present to watch hundreds of thousands of ordinary people (the ‘Unarmed Forces of the Philippines’) take back their democracy.”

Because of his close ties with Cedarville, Jenista visited campus often when he was in Ohio. He embraced the opportunity to speak to classes about foreign policy, and when he was abroad, his family hosted missions teams from Cedarville. After 25 years of serving the United States, Jenista took early retirement and returned to teach at Cedarville.

“I would never have had the opportunities that I did,” said Jenista, “if Cedarville professors hadn’t said ‘Let’s make sure that Frank Jenista has the preparation he needs to go on in this field.’”

Jenista stresses the importance of learning about politics in today’s global world. “The world we’re living in doesn’t stop at the shores of the Atlantic and Pacific or the borders of Mexico,” explained Jenista. “We’re on an increasingly interrelated planet. You can’t be effective in your community, in your career and in living out your faith if you’re not aware of the big forces that are changing our planet.”

In and out of the classroom, Jenista enjoys preparing students for the real world. He relishes the opportunity to act as an academic advisor and life coach to students. “Establishing relationships with students is tremendously rewarding,” said Jenista, “watching them take what they’ve learned at Cedarville, spread their wings and take off to careers all around the world.” 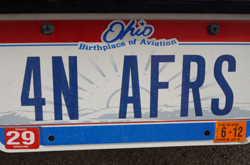 Frank Jenista, Ph.D., embraces his love of international diplomacy in many aspects of his life. Photo credit: Catherine Martin