This year Cedarville University is celebrating their 125th year since its charter back in 1887. In recognition of this anniversary, a historical exhibit has been placed in the Biblical Heritage Gallery, located in the Center for Biblical and Theological Studies.

The exhibit opened in January and will remain in the gallery until October. It is free and open to the public. The focus of the exhibit is to highlight important people, events and accomplishments that have marked the university’s history.

“Getting a sense of heritage helps us appreciate what we have today,” says Lynn Brock, dean of library services and gallery curator.

The gallery is broken into segments that hone in on key time periods. The exhibit starts with the birth and creation of Cedarville College, made possible by the financial support and leadership of people in the Reformed Presbyterian Church. Without these efforts and sacrifices, Cedarville College would never have opened its doors to students in the early 1890s.

The exhibit highlights some of the challenges along the way; facing pressures of World War I, the Great Depression, and World War II. These events created financial instability and enrollment difficulties which were heightened by poor leadership in the 1940s. On the verge of closing, ownership of the College was assumed by the Baptist Bible Institute of Cleveland and the College was re-launched in 1953 under the leadership of Dr. James Jeremiah, who led the institution for 25 years. The leadership of Dr. Paul Dixon led the university for another 25 years to its current transitional period.

The exhibit captures the passion and determination of many who gave their hearts and time to the university, which made today’s Cedarville possible.

“We are paving the way for future generations,” says Brock. 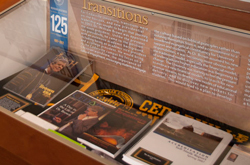