IT Department Announces Switch from GroupWise to Google

Cedarville University is changing its email and calendar provider from GroupWise to Google. Cedarville has used GroupWise or its predecessor, Word Perfect Office, since 1992 when CedarNet began. Google will provide email, calendar and document collaboration support for the school, among other features that Google Apps for Education provides.

One of the major reasons Cedarville started looking for a new email platform was to provide better support for mobile devices like phones and tablets. “The GroupWise interface for these devices, especially for calendaring, has not been reliable,” David Rotman, Ph.D., associate vice president for technology, said. “We were also interested in finding a provider that would offer seamless access to file storage in a Web environment.”

Rotman said Cedarville IT considered Microsoft and Google as replacements. Both companies offer basic service at no charge to higher education institutions. Eventually Cedarville IT chose Google because it offers email and other basic applications such as documents and spreadsheets in a method that is easy to use and is familiar to most students. “Google also provides a variety of applications that enhance the online experience,” Rotman said. Examples include YouTube and video chat.

“I think the online collaboration tools such as shared document editing, Google Sites and Google Groups, will prove to be more powerful than any of us could have anticipated,” Rotman said. “Having access to these services from phones, tablets and computers will enable students, faculty and staff to stay in touch and work on projects in environments that are familiar and are close at hand.”

Rotman said the basic email services provided by Google will be fairly natural: “Most people on campus have used a Web interface for email, either for GroupWise or for some other platform.” Rotman does not see much difficulty in learning to use the new software. “What will take a little longer is learning how best to organize our work,” he said. With new collaboration tools, groups will have to determine how best to share documents between members.

Rotman said he is excited about the move to Google Apps for Education: “In a year or so, we will look back on this decision as another step forward in Cedarville's extensive use of technology.”

Cedarville will gradually transition to Google. Alumni from years prior to 2011 will make the change in June, alumni from 2011 and 2012 will change in July, students will also change in July and faculty and staff will switch in October. 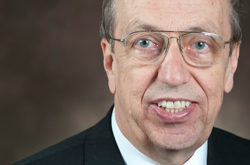