Jeff Struecker will be speaking at Cedarville University's morning chapel on Wednesday, March 28.

Enlisting in the U.S. Army at the age of 18, he completed 22 years of active service. He served as a chaplain in the Army and is continuing to work for the Lord as an associate pastor of ministry development at Calvary Baptist Church in Columbus, Georgia.

Struecker holds a Master of Divinity degree from Southern Baptist Theological Seminary. He has written five books that capture his audience with the challenges that he faced while fighting for his country. By sharing his stories, he hopes that he will help prepare other young men for any life situation.

“I think God often times will take us to a point of crisis, just to show us that He can be trusted and to show us how powerful He is, how good He is and the plans that He has for us.”

You may also listen to the web stream of chapel. To order a CD, DVD, or MP3 download of a chapel message, visit the Cedarville University Media Store. 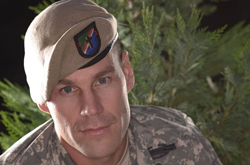 Major Jeff Struecker will be speaking in Cedarville’s morning chapel on March 28 about the challenges that he faced while serving our country. Photo courtesy of Jeff Struecker