The event will begin at 10 a.m. and will be held in the Jeremiah Chapel of the Dixon Ministry Center at Cedarville University. This event is free and open to the public.

Gerson is a columnist who appears in the Washington Post. He is the author of “Heroic Conservatism” and co-author of “City of Man: Religion and Politics in a New Era.” Gerson serves on numerous boards and committees and is committed to addressing world poverty and injustice. In 2005, TIME Magazine named Gerson to its list of “The 25 Most Influential Evangelicals in America.”

He was a top aide to President George W. Bush as Assistant to the President for Policy and Strategic Planning. Prior to that appointment, he served in the White House as a speechwriter. Gerson joined the Bush presidential campaign in 1999 as chief speechwriter and a senior policy adviser. He was also previously a senior editor covering politics at U.S. News and World Report.

In addition to speaking in chapel, Gerson will also speak at Cedarville University’s Critical Concern series.

You may also listen to the web stream of chapel. To order a CD, DVD, or MP3 download of a chapel message, visit the Cedarville University Media Store. 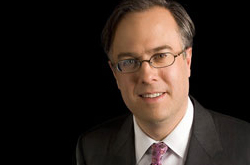