Cedarville University hosted Michael Gerson for its Critical Concern Series on March 22, 2012. Gerson spoke on the topic “Graceful Citizenship: A Conversation on Christian Civility and the Common Good,” encouraging evangelicals to actively engage in politics and promote values of human dignity.

Gerson served as speechwriter and senior policy advisor for former President George W. Bush and currently serves as senior advisor at ONE, a bipartisan organization dedicated to combating extreme poverty and preventable diseases.

Gerson discussed that evangelicals often find themselves torn between their place as citizens of the world and as citizens of heaven but encouraged them to contribute to society today.

“Politics is a temptation, responsibility, addictive drug and medicine,” Gerson said. He stressed that religious people must have a voice in politics in order to reflect a genuine pluralistic society.

Gerson also stated that the most important element of religious teaching that pertains to politics is the study of anthropology and human value. He said that the belief in human value changes the conduct and content regarding politics. He said that the conduct of evangelicals must be grounded in respect for others regardless of the views they might hold, and the content of politics must be grounded in the belief of human dignity.

“Human beings are in the center of concern because the purpose of government is to serve the people,” Gerson said. He used the example of abolitionists who brought about the end of the slave trade and stated that this group demonstrated that religion and conscience can be used as a positive force in the world.

“Religious minded people have a tremendous responsibility,” Gerson said. “Much of the future justices of our age will be determined by their actions.”

Students such as Andrew Herting, a junior majoring in mechanical engineering, were challenged to rethink the way they engage politics as Christians.

“We are obligated to respond to the suffering which we see around us, and politics is one arena where we can make a difference on a large scale,” Herting said. “If we separate our political views from our faith, we are neglecting an amazing opportunity to work for the Kingdom.”

Herting said that the Critical Concern Series challenged him to live out principles of faith in relation to culture.

“By bringing in great thinkers who are on the ‘front lines’ of important issues in our society today, we are given a chance to hear different perspectives as to how we can be a part of what God is doing in the world around us.”

Gerson concluded by reminding the audience that every American has a responsibility, because “the God who grants us our rights also requires us to protect them.”

Gerson is a nationally syndicated Washington Post columnist, a contributor to Newsweek and the co-author of “City of Man: Religion and Politics in a New Era.” He has also served as the Roger Hertog senior research fellow at the Council on Foreign Relations Immigration and is currently a senior research fellow at the Center on Faith and International Affairs at the Institute for Global Engagement. 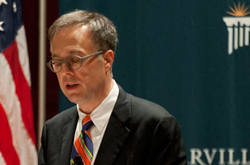 Former presidential speechwriter Michael Gerson spoke on the topic “Graceful Citizenship: A Conversation on Christian Civility and the Common Good.”