Students play the role of U.N. delegates at the Model U.N. conference and represent countries from around the globe. Delegates must accurately stay in character as they represent each nation’s interests and policies as they work to negotiate solutions that address a wide range of global issues. Cedarville’s Model U.N. team represented the countries of China, Greece, Iran, Kenya, South Africa, Sweden, Syria and Venezuela at the 2012 conference.

Frank Jenista, Ph.D., advises Cedarville’s Model U.N. team. His 25-year career as an American diplomat and his current role as professor of international studies allow him to bring a unique perspective to his team.

“After I retired from the State Department and came to Cedarville University to teach international studies, I was looking for an extracurricular activity for international studies majors and others interested in global issues,” Jenista said. “When I learned of the Dayton Model U.N. Conference, I quickly assembled a team and that started what has been an impressive track record ever since.”

Cedarville began participating at the Dayton Model U.N. Conference with four students in 2002, and this year’s team of 15 students was the largest group the University has sent to the conference.

Students who participated at the conference said the event taught them many valuable skills in areas such as organization and research and helped them understand the process of gaining consensus on issues.

Cedarville’s 2012 co-captain Joseph Crupi, a junior international studies major, shared that Model U.N. has taught him how to work efficiently in groups with diverse interests and has taught him valuable leadership skills.

“Model U.N. has allowed me to develop an in-depth focus on specific policy issues and to see these issues from multiple perspectives,” Crupi said. “Representing a different country's position on controversial issues has increased my respect for other viewpoints and occasionally challenged my own opinions.”

Nathaniel Davidson, a senior majoring in history, said that the most compelling lesson he learned occurred when a delegate from another school e-mailed him the day after the conference and expressed her gratitude for the conduct of the Cedarville team and her appreciation for how she was treated by the Cedarville delegates.

“It was a great lesson that reminded me that the most important questions at the end of the day are not ‘Did I get what I wanted? Was my performance recognized? What else would I rather be doing?’” Davidson said. “Rather, I should be asking myself, ‘How was Christ perceived by virtue of how I acted today?’ Because the people with whom I interact with are either pointed toward Him or away from Him by my actions.” 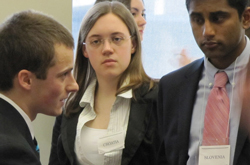