Team members Laura Henkenius, a senior global economics major, and Nathanial Davidson, a senior history and political science major, were additionally voted as Outstanding Delegates by their peers in the ATT committee.

At the Model U.N. Conference, students play the role of U.N. delegates and represent countries from around the globe. Delegates must accurately stay in character as they represent each nation’s interests and policies as they work to negotiate solutions that address a wide range of issues.

Frank L. Jenista, Ph.D., advises Cedarville’s Model U.N. team. His 25-year career as an American diplomat and current role as a professor of international studies has inspired him to provide Cedarville students with opportunities to engage in multilateral diplomacy while addressing relevant issues of our time.

“After I retired from the State Department and came to Cedarville University to teach international studies, I was looking for an extracurricular activity for international studies majors and others interested in global issues,” Jenista said. “When I learned of the Dayton Model U.N. Conference, I quickly assembled a team, and that started what has been an impressive track record ever since.”

Benjamin Roose ’09 is a former member of the Cedarville Model U.N. team and is currently pursuing a medical degree from The Ohio State University College of Medicine. He shared that Cedarville’s involvement in Model U.N. reflects the University’s dedication to excellence in academic achievement and in preparing students for lifelong success.

“I learned how to be an effective member of a team through Model U.N.,” Roose said. “I learned about public speaking, directing conversations and developing leadership through knowledge of the subject material and influence.”

Roose stated that the skills learned in Model U.N. and at Cedarville University have equipped him for the various challenges that he faces in medical school and in other areas of his life every day.

“Model U.N. is an experiential learning opportunity,” Roose said. “I have been able to use the skill of directing conversations that I learned through Model U.N. in various medical school interviews.” 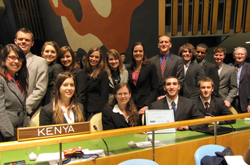