David Kauffman, a senior at Cedarville University, was one of six saxophonists chosen to participate in a master class given by Joseph Lulloff, distinguished professor of saxophone at Michigan State University.

A master class is a public lesson on stage, given to students by an expert of the discipline they are studying. Beth Porter, associate professor of vocal music at Cedarville, said, “In a master class, all the students and often spectators watch and listen as the master teacher teaches one student at a time. The student typically performs a single piece which they have prepared, and the master teacher will critique them and offer advice on how to better play it.”

Chester Jenkins, adjunct instructor for music and worship at Cedarville, said, “Experiences like this give the student an opportunity to gain additional perspective or insight from a highly recognized artist or teacher.”

The road to the master class was paved with a lot of hard work. Kauffman began playing in the fourth grade and continued taking private lessons until middle school. Kauffman picked up the practice again in high school and decided his senior year that he wanted to be a music teacher. Now he is finishing his music education degree and looking at graduate school. “Grad school is something I never thought I'd be doing,” he said.

As a result of the master class, Shelley Jagow, Ph.D. and professor of music at Wright State University, contacted Kauffman to see if he would be interested in pursuing graduate studies there. Kauffman also applied for a teaching assistant position at the university.

Kauffman said he was blessed to have a teacher like Jenkins. “Even though I didn't work with any of the sax profs at the master class, I could tell by the playing of others that Cedarville's sax studio is and will continue to be in very good hands as long as Chet's around.”

Jenkins said Kauffman has worked diligently to improve as a saxophonist and as a musician. He said Kauffman’s studies at Cedarville have been defined by a tremendous work ethic. “His ability to interpret the music he is playing has grown by leaps and bounds,” Jenkins said. “Most impressively, he has developed a wonderful tone on the saxophone.”

All his hard work on the saxophone brought him to the day of the master class. Kauffman said he was nervous and excited. “Because I have played so little off campus, I didn't really know what to expect,” he said. “I think my biggest takeaway was that I could play with other students from bigger schools with better-known music programs.”

Porter, also chair of the department of music and worship, said that the whole experience shows that Cedarville is preparing students to compete on the professional level. “It says that we are preparing our students as well as students receiving training at large state schools or elite music conservatories. It says that we are doing an outstanding job at educating our students.”

Being chosen for a master class is a high honor in the music world. Porter said, “Master class participation is viewed very favorably in the music world as evidence that the participant has reached a high level of musicianship, technical ability and is ready to enter the professional world of music.” 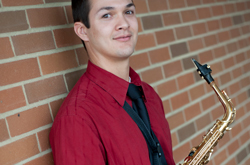 David Kauffman was one of six saxophonists chosen to participate in a master class given by Joseph Lulloff, distinguished professor of saxophone, at Michigan State University. Photo credit: Scott Huck/Cedarville University