The Ohio Tuition Trust Authority was founded in 1989 and exists as a state agency within the office of the chancellor of the Ohio Board of Regents. Its goal is to help Ohio families save for a college education through offering and administering Ohio’s CollegeAdvantage 529 Savings Plan. The organization offers multiple investment options in order to meet the diverse needs of families saving for college.

The other members are appointed by Ohio’s speaker of the House of Representatives and the president of the Senate who appoint one member from each political party in the respective legislative bodies.

Brown has served as president of Cedarville University since 2003. Prior to his current position he served as president of Bryan College for 10 years. A graduate of the University of South Florida, Brown holds a Master of Theology degree and Ph.D. from Dallas Theological Seminary. He has authored three books including “Making Sense of Your Faith,” “Where Have All the Dreamers Gone? Observations from a Biblical Worldview,” and “Making Sense of Your World” with Gary Phillips. He has also written numerous articles for journals, magazines, encyclopedias and newspapers and has lectured internationally in Asia, Europe, the former Soviet Union and South America.

Brown and his wife, Lynne Jones Brown, have been married since 1976 and have two children, April and Alex. 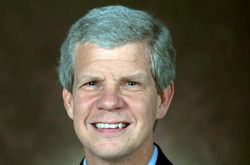 Cedarville University’s President William E. Brown, Ph.D., is now a member of the Ohio Tuition Trust Authority’s board of directors.