According to David Ormsbee, assistant dean of the Cedarville University School of Pharmacy, the School annually offers PCAT review sessions for pharmacy students. The sessions are led by pharmacy students who have previously done well on the PCAT.

Ormsbee observed that Cedarville pharmacy students are excelling on the PCAT for two main reasons. First, the program attracts students with strong academic credentials. “The average pharmacy student here had an ACT score that ranked them among the top 10 percent of college students nationally. Also, the average high school grade point average for our enrolled pharmacy students is 3.8 on a 4.0 scale.”

Ormsbee also attributes the success to the strength of Cedarville’s science curriculum. “Given this heritage, it is not surprising that students in the prepharmacy curriculum do well on the PCAT.”

Many of the students entering the University's new school of pharmacy this fall scored among the top 25 percent of the more than 30,000 PCAT test takers. One of these students, Rebecca Widder, started studying for the PCAT three months before the test. She studied for each of the test’s seven sections in unique ways. For instance, she studied for the verbal ability section of the test by using flashcards to help her memorize any words she came across in her reading that she did not know. In studying for the test’s two writing sections, which require the test taker to analyze and propose solutions to current problems, she listened to NPR and read CNN.com every day to get a sense of how to answer any questions related to current events. She also decided to read and work through her freshman-level General Chemistry textbook.

Widder advises prospective test takers to start studying early. “Take the test seriously, but it’s not worth stressing over. As long as you put the work into it now, you should be ready by exam day.”

She spoke highly of her time in the undergraduate portion of her pharmacy education at Cedarville. “The science courses here are challenging and prepare you well, so for most of the science portions of the test, all I had to do was review the details of the major concepts, not relearn all of them.”

The MCAT
Samantha Barclay, a senior, achieved an excellent score on the MCAT. However in high school, Barclay said she lost her passion for scientific inquiry. “Learning ebbed to mere rote memorization. While at Cedarville, my interactions with my professors and peers reinstilled my curiosity.”

With this curiosity came a drive to do well on the MCAT. Barclay began studying for the MCAT during her freshman year and gradually ramped up her studying as she approached the test day. During the month before her test she studied between eight and 12 hours per day.

Barclay offered similar words to Widder’s advice for any prospective test takers: “Although it may sound cliché, begin studying early.”

Dennis Flentge, Ph.D. and chair of the department of science and mathematics, said that while Cedarville doesn’t have any overt activities that prepare students for the MCAT, it does provide a rigorous curriculum that lays the intellectual foundation for succeeding on the exam.

Barclay said that Cedarville courses provided excellent preparation for the MCAT. “These classes included not only the scientific content, but also developed the critical thinking skills that are necessary for the MCAT.”

Barclay has big plans for her time after Cedarville. Her success on the MCAT and at Cedarville has helped prepare her for that future. Barclay has enrolled with the 2017 class of the Cleveland Clinic Lerner College of Medicine. “This five-year medical school program closely integrates research and clinical training, producing students who graduate with a Medical Doctorate with special qualifications in biomedical research.” In addition, Barclay plans to earn a master’s degree during those five years.

Flentge attributes Cedarville students’ success to a variety of factors: “First, we have a rigorous curriculum for the students and a faculty that expects a lot from the students. Second, we have talented students who are motivated to do well. Third, the faculty invests a lot of time with the students.” 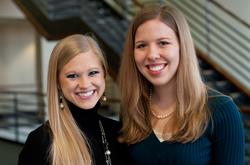