Cedarville University has received pre-candidate status from the Accreditation Council for Pharmacy Education (ACPE), which will authorize the University’s school of pharmacy to matriculate its first class of professional students in the fall of 2012. The school of pharmacy received ACPE approval during the January 18-22, 2012 meeting of the ACPE board of directors based on an on-site evaluation conducted on November 1-3, 2011.

Cedarville’s School of Pharmacy seeks to be the school of choice for Christian students as it focuses on training exceptional pharmacy practitioners who embody Christ-like compassion and pursue innovative solutions.

“The profession of pharmacy represents a great opportunity for Cedarville graduates to engage the culture, care for the needs of its citizens and influence others for Christ,” said Jeffrey Lewis, R.Ph., Pharm.D., associate dean of the school of pharmacy. “Health care professionals often interact with people during times of significant personal physical and emotional need and it's during such times that their spiritual needs also become apparent.”

Approximately 50 new students will be entering the professional program in fall 2012.

One of these is Jason Holmes, a junior who will be entering the professional pharmacy program in fall 2012. He was drawn to Cedarville because of its combination of academic excellence and training.

“The University has tailored its education and academic requirements to enable me to be a competent and knowledgeable pharmacist one day, one who will exhibit the highest level of professionalism within health care,” Holmes said. “Cedarville's school of pharmacy has placed a great emphasis on training leaders who will achieve results while building relationships with both co-workers and peers.”

Junior Jenna Lawhead will also join the professional program in the fall.

“One of the primary things that I love about the pharmacy program here at Cedarville is that faculty members actually care about their students and are interested in both our spiritual and academic needs,” Lawhead said. “Attending Cedarville will enhance my future career as a pharmacist because I will focus more on giving glory to God through my career.”

An additional on-site evaluation will be scheduled during the 2012-2013 academic year in order to gather further information for the school of pharmacy to be considered for candidate accreditation. If candidate accreditation is granted and the program continues to develop, full accreditation status of the Doctor of Pharmacy (Pharm.D.) degree would be considered by the board following the graduation of students from the program in 2016.

The school of pharmacy has previously received approval from the Higher Learning Commission of the North Central Association of Colleges and Schools and approval from the Ohio Board of Regents in the spring of 2011, which represent two of the three accreditation approvals required for the pharmacy program. 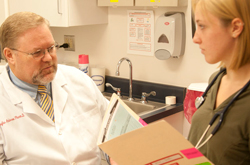 Cedarville University’s School of Pharmacy has received ACPE pre-candidate status, authorizing the school to enroll its first class of professional students in fall 2012.