After a concert on Sept. 26, Phil Wickham spoke in a casual setting to worship students about his songwriting and worship career. Wickham answered questions about many topics including inspiration for his songs, his band members, the process he goes through when writing a new song and his international travels.

Wickham said that when he was young, he garnered experience from his worship-leader parents and writing worship songs for his youth group. He knew at a young age that he wanted to lead people in worship and ultimately lead them to God. He says it’s amazing to put big groups of people on the same page by singing the same song to the same God.

When it comes to songwriting, Wickham says he never had a solid formula. He tries to figure out melodies and chords and eventually hum a melody he thinks might work.

Inspiration for songs comes at random moments and can, “come out of anywhere,” he says. His inspirations for songs are the moments that he wants to write about, like his song, “Canon.”  When Wickham wrote “Canon,” he was looking at the stars at night. Wickham says that he likes to, “find a thought and make it massive and make verses matter to that thought.” He considers the chorus the subject and the verses as the adjectives.

He says his songs are, “almost like journal entries.”  He likes to look back at his songs and say, “I was needing this,” or “this is what God was doing in my life.”

Wickham says he appreciates his wife’s honesty when he is writing a song. Part of songwriting, he says, is going back to the drawing board many times with a certain bridge or second verse that doesn’t seem right.

Wickham is currently looking for new angles on his next record and knows that he wants to write about heaven.  He would like to capture a thought that “stirs the heart,” and allows people to see God in a special way.

Isaac Murrell, a sophomore worship and comprehensive Bible student, was inspired to see Wickham’s heart for worship and to hear how God has prepared him and is continually using him to lead and encourage the body of Christ in and through worship around the world.  “His attitude of loving God, pursuing what he enjoys and letting God open doors is liberating. Wickham encouraged us to continue living a lifestyle of worship in all things, both because of the Gospel and for the sake of the Gospel,” said Murrell. 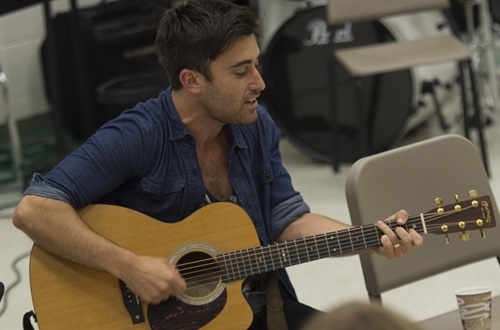