Cedarville graduates are continuing the University’s legacy of excellence and Christ-like impact. Whether in graduate schools or their chosen career field, graduates are prepared for the rigorous challenges of postgraduate life.

Laura (Anfang) Geer ’10 graduated with a degree in early childhood education and now teaches at an elementary school in New Jersey. She said Cedarville exposed her to multiple unique teaching experiences that prepared her for the students she now has in her classroom. She was also able to utilize her love for music while earning her education degree.

“The professors and staff at Cedarville are focused on helping you accomplish your goals both academically and spiritually,” Anfang said. “I never thought I would be able to pursue my love for music and passion for education all at the same time, but Cedarville made it possible. I learned how to combine the abilities God has given me to be a better teacher.”

Krista (Ray) McGee ’10 graduated with a degree in computer engineering and now works as a computer engineer at Wright Patterson Air Force Base and is thankful for the excellent education and biblical foundation she received while at Cedarville.

“My boss shared with me the other day that he has been blown away with the professionalism and education level demonstrated by the Cedarville graduates he has hired,” McGee said. “There are several other graduates working in the same building as me, and they are known for their integrity and work ethic.”

Joy McBride ’10 now works as a morning show co-host and community impact director for the Christian radio station WAY-FM in Fort Myers, Florida. A broadcasting and digital media major, McBride received her current position at WAY-FM after an internship she had with the station.

“My education at Cedarville prepared me for my current job by giving me hands-on training and experience in my field of study as well as by molding me spiritually to present my faith daily on the radio,” McBride said. As a student, McBride was extensively involved in the University’s broadcast organization Resound Radio as a show host and a disc jockey.

“The projects that I did at Cedarville gave me experience in many areas of electronic media that I now use in my job,” McBride said. “The student radio station gave me the perfect outlet to gain experience for my resume and helped me to acquire the skills needed to walk into the job I wanted right after finishing school.”

“The engineering program at Cedarville has trained me to be a competent professional in engineering as well as how to integrate my Christian worldview within a secular field,” Jones said.

Lewis encourages prospective students to remember to balance academics with service and relationships.

“The engineering program here has done a great job in preparing me academically, but academics represent 50 percent of what I have learned here at Cedarville,” Lewis said. “I encourage prospective students to get involved in a ministry and surround themselves with Godly friends.”

Many Cedarville graduates have also continued their education through graduate studies at universities such as Michigan State University, The Ohio State University, John Hopkins University, The Institute of World Politics, Trinity Evangelical Divinity School and the University of the Pacific. Graduates are pursuing advanced degrees in subjects such as law, international intelligence, veterinary medicine, public health, seminary, osteopathic medicine and political philosophy.

Rachel (Hurley) York ’11 graduated with a degree in biology and is now a physician assistant student at the Massachusetts College of Pharmacy and Nursing.

“I feel very prepared academically to handle the intensity and rigorous schedule of my accelerated PA program,” York said. “My professors provided me with a solid framework of knowledge that I’m able to build upon and apply to my studies.”

York shared that her experience at Cedarville equipped her with a solid education that allows her to continue her career pursuits while integrating her faith.

“Not many other schools can offer solid academics in a thriving and vibrant Christian setting, and this makes CU such a phenomenal experience,” York said.

Thomas DeVinney ’11 majored in sport management and now is studying law at the Pepperdine University School of Law. He said Cedarville equipped him with writing, public speaking and professional skills, all of which currently apply to the material he is studying in graduate school.

“Also, because of my Cedarville connections I was able to obtain a great internship with the NFL Players Association in Washington, D.C. last spring, which really helped build my resume,” DeVinney said.

Emily Ahrens ’11 is obtaining an advanced degree in political philosophy through the Master of Politics program at the University of Dallas. A history and political science major, Ahrens commented that Cedarville prepared her to think broadly and analytically.

“The professors gave me a holistic understanding of the discipline and a love for the questions involved in politics,” Ahrens said. “More importantly, the department gave me the confidence and leadership opportunities that inspired and motivated me beyond the four years of undergraduate work.”

Casey (Hinzman) Niemiec ’11 encourages future students to keep an open heart regarding their postgraduation plans. Graduating with a degree in mechanical engineering and a minor in biomedical engineering, Niemiec now works as a Solidworks trainer and said that this is definitely the place God wants her, even though this was not a position she was interested in originally.

“If you have a dream or a passion for a field of study certainly go for it with all your heart, but don't hold such a tight grip as to miss out on other plans or broader plans that God has in store for you,” Niemiec said. “Maybe you have gifts and talents that you have not discovered yet. A little challenge is always a good thing, and let God roll with the plans.” 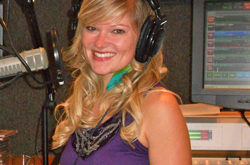 Joy McBride ’10 said that Cedarville prepared her for the challenges she faces as a co-host and community impact director at WAY-FM in Florida. Photo courtesy of Joy McBride