Concluding a Decade of Ministry

Tuesday, October 30, 2012
William E. Brown, Ph.D., president of Cedarville University since 2003, shared with faculty, staff, and students in Chapel this morning that he will step down as president, effective June 30, 2013. Following his presidency, Dr. Brown will serve as Chancellor. Along with Dr. Paul Dixon, who became Chancellor in 2003, he will represent the University, maintain speaking opportunities, and fundraise.

“Serving the faculty, staff, and students at Cedarville University has been a true joy for Lynne and me during the past 10 years,” said Brown, referring to him and his wife. “The past 10 years are a testimony to the fact that as Christians, when we humble ourselves and serve the Lord fully, He will bless our work for his glory.”

Dr. Brown’s tenure is marked by transformation and transparency. The campus community has experienced significant renovation and new construction of facilities, including the Center for Biblical and Theological Studies building in 2008 and the Health Sciences Center in 2012. Also, all of the residence halls have been remodeled so that students have more modern living conditions. Since 2003, more than $60 million dollars has been raised.

Student enrollment has increased from 2,996 in 2003 to 3,386 this year. The increase is largely due to Dr. Brown’s vision to strategically reassess the University’s financial aid. In 2010, the University increased scholarship aid significantly and freshmen enrollment jumped from 724 in 2009 to 859 in 2010. With the addition of master’s degrees, online programs, and the doctoral degree in pharmacy, Cedarville’s overall enrollment has reached its apex this year. Still, under Dr. Brown’s leadership, strategies are in place to continue the increased enrollment.

Academically, since 2003, Cedarville has added new programs that meet the needs of students and employers. These new programs include pharmacy, industrial and innovative design, forensic science, and journalism. The University has also increased international recruitment efforts, including the development of an office in China.

But buildings and academic programs are only a part of Dr. Brown’s legacy and impact at Cedarville University. Perhaps his greatest strength is his transparency with individuals and the relationships he’s fostered on campus with students, faculty, staff, and alumni. Students claim the chancellor-to-be is a “president to students.”

“When I think about Dr. Brown, I think about the caring compassion he showed everyone,” said Zak Weston, Student Government President and a senior from Grand Rapids, Mich. “The most important person in his life is the person who is in front of him at the moment.”

Never was this more true to Weston than when he was at Dayton International Airport two years ago. Approaching security, Weston spotted Dr. Brown and the two waved to each other. Twenty minutes later, Dr. Brown greeted Weston as he cleared security, and Brown purchased coffee for both as they interacted before they boarded.

“We talked for 35 minutes before we departed to get to our planes,” said Weston. “He didn’t have to wait for me, but he did. That’s the type of president he has been at Cedarville. This memory will always be important to me.”

The accomplishments in student recruitment and academic growth, facilities, and relationship-building are noteworthy. They are reasons why U.S.News & World Report and the Princeton Review consistently rank Cedarville University in the top five among Midwest universities and why student satisfaction has experienced record highs since 2007.

Dr. Brown will be missed on campus but the campus community looks forward to his role as chancellor. He’s developed a legacy that has strengthened Cedarville University and positioned it well for continued growth and accomplishments for his successor.

A presidential search committee will soon be established and begin seeking the next president of Cedarville University. 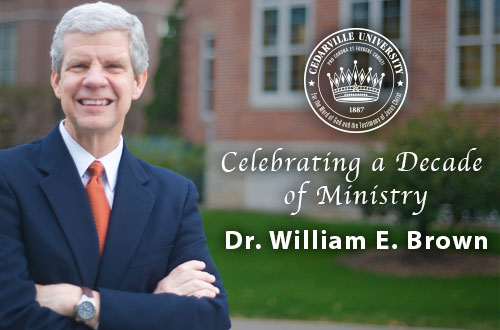