Monday, January 16, 2012
In his new role as president of the Greater Indianapolis Chamber of Commerce, Scott Miller '90 is positioning the organization to serve Indiana’s capital city. Miller’s résumé made him an attractive candidate for the position, having served on the Indy Chamber’s board of directors and executive committee. He recently served three years as CEO of the economic development organization for the city of Indianapolis and has additional background as a business owner in the private sector. He was named president of the Chamber in November 2011.

Looking back on his days as a Cedarville business major, Scott appreciates the lessons in character he learned from his professors. “Although each of my professors provided great learning opportunities and sincerely cared about me as a student,” said Miller, “my most challenging professors taught me more than what was in the textbooks. Chuck Swindoll wrote that ‘Life is 10% what happens to me and 90% how I react to it.’ Professor Anne Rich (accounting), Dr. Ron Walker (statistics), and Dr. Galen Smith (economics) lived this out, and I am grateful for their example.”

Read more about Scott Miller’s priorities for the Indianapolis Chamber. 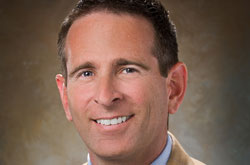