Erika Spudie has spent the last five months on a big stage. Spudie, a senior student from Perrysburg, Ohio, began work with the Columbus Crew, a professional soccer team which competes in Major League Soccer (MLS), in July and concluded her time there at the end of November.

Spudie is involved with all facets of the athletic health care for the team. Her time with the Crew is split up in a variety of areas including: injury evaluation, treatment, rehabilitation, strength and conditioning components, and diet and nutrition.

She arrives in the morning and helps prepare the team’s facilities for practice, which could include anything from arranging taping stations to filling water bottles to readying hot tubs. Once the players arrive, she helps the team’s two athletic trainers with pregame treatments, taping, rehab and any injury evaluations. During practice, Spudie works with the Crew staff to treat injuries and work through any necessary rehabilitation protocols.

On such a big stage, Spudie said she is thankful for an experience like this one. “Getting to know the players on the team has been such a benefit to having a major league internship such as this one,” she said. “The guys on the team have been so respectful and have created an environment conducive to learning.”

The nature of the work allows athletic trainers to spend a lot of time with those they are treating. As such, it is easy to form relationships with the athletes. Spudie’s favorite part of her work was the daily contact and relationship-building with the athletes she served.

“Having such a consistent relationship is really important for building rapport, and it’s an aspect of the profession I enjoy,” she said. One way she did so was by teaching herself Spanish during her two-hour commute so she could better communicate with some of the Latin American players on the team.

“This has strengthened my relationships with some of them, which has really blessed me in ways they don’t even realize,” she said.

“If we don’t show them the ministry opportunities in athletic training, then we’re doing a disservice to our students,” Weller said.

Weller’s heart for ministry opportunities through athletic training is evident in his own life as well: “I’ve done this for a long time and at a lot of places and this is an opportunity that I don’t want our students to miss.” 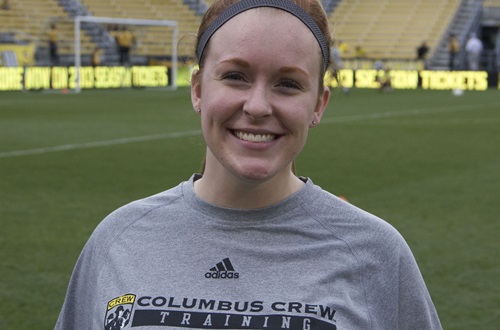 Athletic training major Erika Spudie had the unique opportunity to serve as an intern with the Columbus Crew. Photo courtesy of Erika Spudie.