Student Continues Tradition of Cedarville Excellence in Teach for America

Kimberly Prijatel is the latest Cedarville student to be hired by Teach for America. TFA selects recent college graduates, graduate students and professionals to commit to teaching in public schools around the country for two years. TFA seeks to make those corps members “lifelong leaders in the effort to make a great education, and the opportunities that come with it, a reality for all students.”

According to Marissa Ring, a TFA representative, the organization is dedicated to ending educational inequality. “We place top leaders of all backgrounds in the classroom for two years to significantly raise the academic achievement of the students they teach in an inner city or rural area.” After the new teachers work for two years, TFA encourages them to continue advocating for their students however they can. This may mean staying in the classroom or working at the policy level to enact change for students.

“Our organization is unique because we have over 20,000 alumni transforming the landscape of education in our country,” Ring said. “Moreover, our program provides an opportunity for top college graduates to make a tangible impact upon graduation.”

Kevin Heath, Ph.D. and professor of English at Cedarville, described the organization as “very prestigious, highly competitive and highly coveted.”

In fact, Glassdoor, a site that offers an inside look at jobs and companies, lists Teach for America seventh in its list of the “Top 20 Most Difficult Companies for Interviews.” The organization had a 12 percent acceptance rate in 2010.

The application process to TFA is rigorous. The process begins with a two-to-three hour application. The next step for Prijatel was an all-day interview. She and 15 other applicants had to give a five-minute teaching lesson, participate in a 15-minute group interview and do a personal hour-long interview. Prijatel made it through the process and was hired at TFA on November 8.

Heath said the appointment speaks highly for Prijatel's intelligence and her work as an undergraduate. “She's the kind of student who would have been successful at any college or university she had chosen.”

Heath said Prijatel’s major of choice, English, is a tough but rewarding major. “Students learn to read well and write well. We ask them to think deeply, broadly, clearly, creatively, and, in a sense, fearlessly. Reading closely and writing thoughtfully develops a form of attentiveness that helps students become reflective rather than reactive. If you're an English major at Cedarville, you're adaptive. And in my opinion, that's an excellent attribute for TFA.” Prijatel is also majoring in philosophy.

As a first-generation college student, Prijatel recognizes that education is a privilege. “My own life has been revolutionized by education and my parents’ hard work getting me to that education. It breaks my heart to recognize that other people do not get that opportunity.”

Prijatel decided to join TFA to challenge students as she was challenged. She has high hopes to help those she is teaching. “I hope that my students will understand how relevant knowledge and education are to their lives—that they will not only learn how to express themselves articulately in a job market which requires resumes and interviews, but that they will also learn to self-advocate in a world that tells them their experiences are not central to human experience.”

Her appointment is in New Mexico, which is ranked next to last in the nation in the EPE Research Center’s 2011 “Chance for Success” rankings. She recognizes that challenges are ahead. “Children in the New Mexico communities in which I will teach have way more hurdles than most people in more affluent communities could ever imagine—from economic problems to health problems to resource problems and lacking programs both in- and outside the classroom.”

But Prijatel realizes the problems aren’t insurmountable. “Studies show the most important factor to education and learning, above and beyond resources, is the teacher,” she said. “I need to figure out how to be the teacher that inspires.” 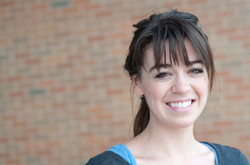