Cedarville University engineering students have been competing in the SAE Aero Design competition for over two decades and have placed in the top five multiple times. In 2012, two Cedarville teams sought to continue that success.

A senior design team, Andrew Dirks ‘12, Daniel Lewis ‘12, Andrew  Schrank ’12, Danny Staudt ’12, and their advisor, Tim Norman, Ph.D., Professor of Mechanical Engineering, made history at the 2012 SAE Aero Design competition  by being the first team to introduce a glider into the competition. A change in the rules for the 2012 Micro Class competition opened the door for the team to begin researching and designing its glider. An underclassman team made up of Byambadorj Bird ‘13, Daniel Cape ‘15, Mark Edmonson ’15, and John Morton  ‘14 also competed with a more tradition design.

The goal of the Aero Design competition is to design, build, and fly a remote control aircraft within design and performance requirements set by the SAE. There are three divisions: Open, Regular, and Micro Class. Micro Class requires a lightweight, efficient flight, while the Regular Class requires a primary focus on maximum lifting capability. A winning score requires points from each of three categories: flying, presentation, and a design report.

The students receive design requirements in August, at the start of the school year. The teams design their plane from September to December, build it during January and February, and perform testing during the month of March to prepare for the April competition.

For the glider to be successful for the senior design team, it had to be very light (less than half a pound), have a high glide ratio (at less 20 feet of horizontal distance for every foot loss of vertical distance), and have an elastic launch system that would propel it high enough to complete the course. These were large challenges for a team that lacked experience with gliders. The team worked tirelessly using all the resources they had to obtain a successful flight, including flight testing in the Doden Field House in the Recreation Center where they could avoid wind gusts that would contaminate the glide ratio data.

The team’s experience at the competition near Atlanta, Georgia, was bittersweet.While the team could boast of launching and flying  the first glider ever in competition, they were not successful launching the plane high enough to complete the full circuit of the course because of less than optimal air field conditions.

The underclassman team experienced some success at the competition. While a crash on the first day of competition prevented their plane from achieving its design maximum with only five rounds of flying, even after an overnight rebuild, this team earned third place in the Most Payload Lifted category with their hand- launched design. Achieving this award was a major victory for this young group of engineering students

According to Norman, both teams can count themselves as successful because of the major hurdles they had to overcome to successfully fly their planes, and the real-world experience they received.

“The competition gives students exposure to situations they might encounter in the real word such as working on a team, communication of ideas, and working under pressure,” stated Norman. He added, “It also gives Cedarville University students interested in aviation an outlet to develop their skills in aeronautical engineering.” 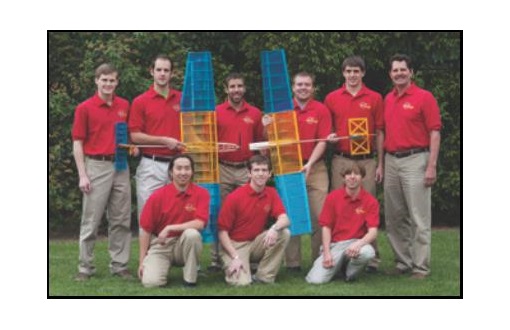