Over fall break, seven theatre students traveled to Staunton, Va., with Professor Matthew Moore to attend a Shakespeare workshop and performances at the American Shakespeare Center’s Blackfriars Playhouse. Blackfriars is a recreation of Shakespeare’s indoor theater in London and hosts an internationally acclaimed company of actors who perform Shakespeare’s plays with an emphasis on their original staging conditions.

Doug Malcolm, a junior from Michigan, said the trip presented an invaluable opportunity for students to see quality theater. “We got to see the best Shakespeare you’ll probably see in America,” he said. “It’s an experience that I wish everybody alive would be able to encounter and truly appreciate.”

Moore, an associate professor of theatre, said the actors at Blackfriars interact with their audience constantly, even inviting people to sit on the stage during performances. “The audience becomes a character in the performance, in essence,” he said. “That’s an incredible and dynamic experience when you’re used to seeing theater from 70 feet away.” Moore said seeing quality shows prompts students to ask if they have what it takes to act professionally. “Every single student walked away saying ‘wow,’” he said. “They were impressed by the rigor of what it takes to be a professional actor.”

This was Malcolm’s second time visiting Blackfriars with Moore. He said his experiences on the 2010 trip inspired him to pursue classical acting as a career.  “I was absolutely blown away,” he said.

Moore said the opportunity for a private rehearsal in the theater was also a highlight for students. “It’s fun to watch someone onstage,” he said, “but also to be on that stage, hearing your voice filling the space.”

Moore said performing Shakespeare is an important challenge that prepares students to perform anything. “Classical work is like the Olympics of acting,” he said. “It’s an important part of our overall program.”

Next fall, Moore will be directing a Shakespearean production at Cedarville. 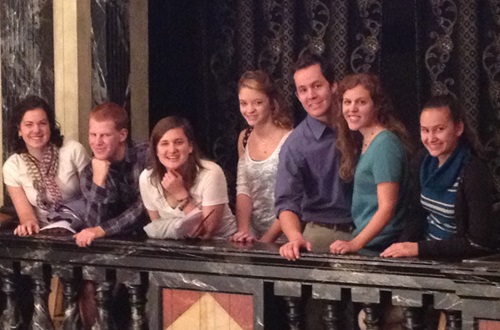 Professor Matthew Moore said the opportunity for a private rehearsal in Blackfriars’ theater was a highlight for students. Photo courtesy of Matthew Moore.