An all-female worship band from Cedarville University is filling a niche for women’s conferences on and off campus, says assistant professor of worship Patrick Anderson. Anderson said the students in Rekindle have had far more opportunities this year than any of the music department’s other groups.

Jena Baumer, who leads the band, said it started when several students auditioning to lead worship at a women’s conference on campus in 2011 decided to form a group. Baumer, a senior worship student from Hartville, Mo., said the band’s name, Rekindle, comes from 2 Timothy and refers to women’s ability to influence believers’ lives through their example and encouragement.

Anderson said that when Baumer came to him with the idea, he thought an all-female band might meet a unique need, but didn’t realize how much. “They’ve done a great job and gotten glowing feedback from the places that they’ve gone,” he said.

Baumer said women’s conferences don’t often have live worship music, especially led by other women. “It’s a unique thing to have a stage full of females doing more than singing or playing the piano,” she said.

Rekindle focuses on contemporary Christian music but also plays acoustic arrangements of hymns and ballads. Baumer says the band’s flexibility allows them to reach a wide audience. Still, co-leader Emma Patterson, a junior from Goleta, Calif. said the group isn’t in demand because of the music but because the members are eager to spend time with women attending the conferences. Patterson said the students enjoy the opportunity to build relationships, receive valuable advice and serve women of all generations.

The band has played for women’s retreats at Faircreek Church in Fairborn and Twin Lakes Camp and Conference Center in Hillsboro, Ind., as well as the Southeast Ohio Women’s Spring Retreat. The group will continue to lead worship for conferences in Ohio and Indiana throughout the spring semester, as well as several events on campus at Cedarville. 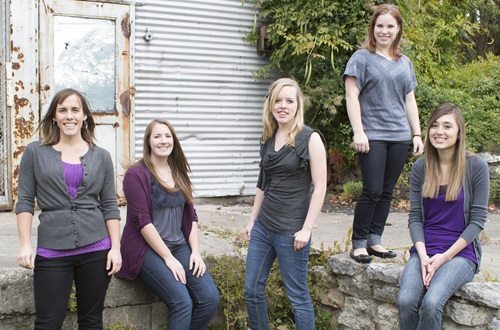