The Cedarville University solar boat team won the Solar Splash Intercollegiate Solar Boating competition for the seventh time since 1997, turning in one of the most dominating performances in competition history.

The Solar Splash Intercollegiate Solar Boating competition will be held in Dayton, Ohio, near the RiverScape in 2014.

Cedarville’s team captured first place in four of the five individual races. It captured the best score in all three slalom, sprint and endurance races — a first time in Solar Splash history — while finishing second in the visual display category. The team had the best technical report finish among the field of 13 schools and it recorded a speed of 53 kilometers per hour — 8 kilometers faster per hour than its previous best time.

Throughout the recent school year, Cedarville’s solar splash team worked on updating its previous world championship boat. For Tim Dewhurst, Ph.D., professor of engineering, seeing the team members learn a skill outside of their comfort zone was very rewarding. “Being on the team helps students get experience in a specialized area in which they don’t have training,” said Dewhurst. “This prepares them to embrace new projects enthusiastically and confidently in their future careers.” Dewhurst and Gerald Brown, Ph.D., advise the team.

Putnam, also a member of Cedarville’s cross-country and track teams,  served as driver for the two-hour endurance event and   beat the nearest competitor by over 1 kilometer and the rest of the field by over 4 kilometers.

Kemmenoe’s new drive train, featuring a forward-facing propeller, also factored into the lopsided victory.  This was the first such type of propeller in Solar Splash competition. Wagner drove for the high speed events and turned in the fastest slalom event time in Solar Splash history.

The team dynamic also raised a unique relationship between students and faculty. “Working on this project gave me the opportunity to interact with the advising professors in roles that were more like a manager-employee or a mentor-mentee relationship than a teacher-student relationship,” Putnam said. “As students gain expertise in an area that the professor may not be very familiar, the relationship becomes more similar to the interaction style found in a work environment, where our professors helped us progress by advising general approaches to problems and challenges.” 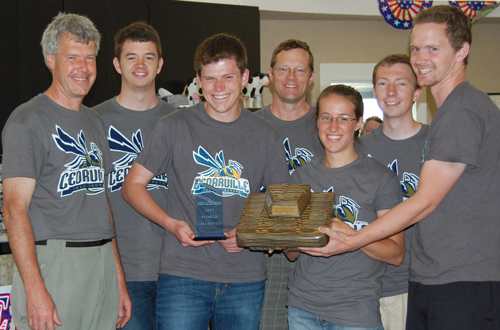