The Cedarville University Career Services has partnered with the office of institutional research to release employment data for the class of 2012.

Each year, the two offices work together to survey alumni six months after graduation. According to Jeff Reep, director of career services, the survey timeline is an industry-wide standard that gives graduates more time to make final decisions on job offers and graduate schools.

According to this year’s survey results, 94.4 percent of Cedarville 2012 graduates are either employed or attending graduate school.

While NACE has not yet released data from its national survey, Cedarville’s placement statistics have a history of being significantly higher than the national average. NACE reported the national placement average for the class of 2011 at 87 percent, while 93.8 percent of 2011 Cedarville graduates reported being employed or enrolled in graduate school.

Reep says this trend is indicative of the quality students Cedarville produces. “This is really a team effort,” Reep said. “Between the excellent faculty, Christian integration and the resources provided by career services, students are exposed to four years of career preparation, which is reflected by the high employment percentage.”

Reep also said that employers notice a difference in Cedarville graduates, specifically in their work ethic and integrity. “There’s something special about a Cedarville graduate that employers pick up on. They’re generally quick learners, ethical decision-makers, and hard-working problem solvers. These are the principles that are reinforced every day in the classroom.”

The career services staff offers a variety of services to students at no charge, including career counseling by certified coaches, resume writing workshops and interview preparation. For more information or to schedule an appointment, visit the career services website. 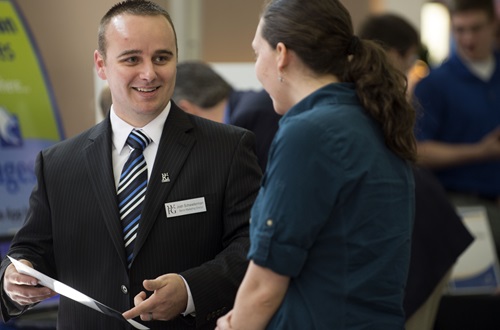 According to a recent survey, 94.4 percent of Cedarville 2012 graduates are either employed or attending graduate school. Photo credit: Scott L. Huck/Cedarville University