According to Ware, founder and executive director of VCP, the average sixth-grade student had third-grade reading level or below when VCP opened. Testing revealed a similar deficiency in math.

“So we dug in,” said Ware. The mission of VCP is to prepare fifth- through eighth-grade students to excel in high school and college as accomplished scholars and to contribute to their communities as ethical leaders. The implementation of the mission statement and the hard work from students, staff and families brought incredible success at the end of the first school year, including ranking as the number one school with the highest reading growth in the state of Tennessee, and second school for math growth in the Memphis City Schools District.

“After our first year, it only got better,” said Ware.  The next year, VCP was recognized by the state Department of Education for being in the top 5 percent of schools in Tennessee for student progress.

Both Ware and Armistad attribute much of their ability to produce creative solutions and think critically to their classes at Cedarville. Ware recalls the passion with which Tim Heaton, Ph.D., professor of education, taught. “It was clear that he realized that perhaps more than any other profession, teaching absolutely transforms the lives of everyone touched for better or for worse.”

After graduating from Cedarville in 1998, Ware taught high school and said that he realizes now how well-equipped he was to create lesson plans and execute them effectively in a way that drives student growth.

Armistad, deputy director of operations at VCP, majored in applied psychology with an emphasis in counseling and graduated from Cedarville in 1997. Armistad said he applies skills he learned during presentations and group projects at Cedarville to current responsibilities.  “Group projects helped me to improve my active listening and conflict resolution skills and develop my overall ability to read people and situations,” Amistad said. “These are skills that I use every day in my role at Veritas.”

The Cedarville culture and student experience also greatly impacted Armistad. “I left Cedarville with lifelong friends, a blue print on how to conduct myself in a Christlike manner in the real world and a degree from a world-class organization,” Armistad said.

Ware echoed a similar sentiment. “Given that I now work in the world of education reform, I would be remiss not to mention how well the classes taken in the education department prepped me for this work,” said Ware.

Ware and Armistad hope to continue adding Cedarville graduates to the VCP mission as they hire teachers for the 2013-2014 school year. 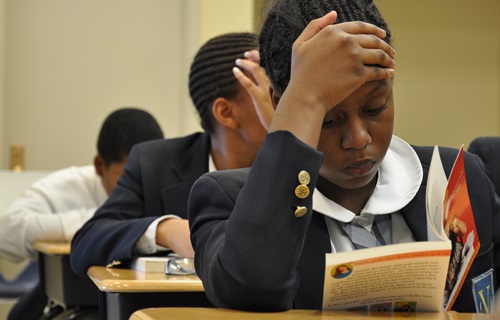