In its third year, Cedarville University’s industrial and innovative design (IID) major has grown beyond the University’s expectations, says Terry Chamberlain, chair of the department of art, design and theatre.

Three students graduated from the program in 2012, and Chamberlain anticipated capping the major at 15. Now enrollment in the class of 2016 is at 21 and growing. Chamberlain attributes the rising interest to Cedarville’s uniqueness as the only evangelical Christian university with an industrial design program.

The University partners with the International Center for Creativity (ICC) to offer the major. Students spend their first two years on Cedarville’s campus, and then gain real-world experience at the ICC studios in Columbus.

Jim Orr, the CEO and lead instructor of the ICC, said the program’s rapid growth is not so unexpected to him. “The Lord gave me a large vision,” he said.

Orr said he is amazed to see the growth of individual students, and he loves seeing others’ reactions too.  After his latest visit to the studios, Chamberlain said he was impressed by the students’ articulate expression, professional work quality and strong work ethic.  “I was astounded at the transformation of these students,” he said. “I couldn’t be more pleased with their progress.”

Jim Stevenson, president of the ICC, said the program is continually shaped by input from industry partners, who want to hire designers who can visualize many solutions to design challenges. The program focuses on consumer product design, transportation design, exterior space design and interior space design.

Gabe Pyle, a 2012 graduate from Dayton who is now a teaching assistant at the ICC, said the hands-on experience helps students develop design skills in a way a classroom structure cannot. Pyle also said the project orientation prepares graduates to meet deadlines and adapt to change in their future careers. “Once the students get to Columbus, we treat them as industry professionals,” he said. “There’s no time to be bored up here.”

Senior Nate Franck of Cheyenne, Wyo., said the students also enjoy the community they form within the ICC studios. “We are a pretty tight-knit team,” he said. “We push each other to do better than the time before.” Junior Derek Ogle of Blair, Neb., said he didn’t want to move to the Columbus studios because he didn’t know anyone else there, but the transition has brought new relationships. “It’s almost like we’re a family now,” Ogle said.

Elena Goodale, a junior from Colleyville, Texas, said she was nervous about transferring into the program without any previous design training, but her professors’ one-on-one instruction has helped her meet the rapid pace. “They’re with you every step of the way,” she said. Junior Sam Goodrow of Flushing, Mich., said the ICC instructors share Cedarville’s Christ-centered focus and teach students to be godly people as well as skilled designers.

Chamberlain said the ICC plans to nearly double its studio space to accommodate the 30 juniors and seniors who will study there next year, as well as collaborating with more adjunct instructors. Orr said he looks forward to enlarging his vision for the program. “As you move toward the goal,” he said, “the dream gets bigger.” 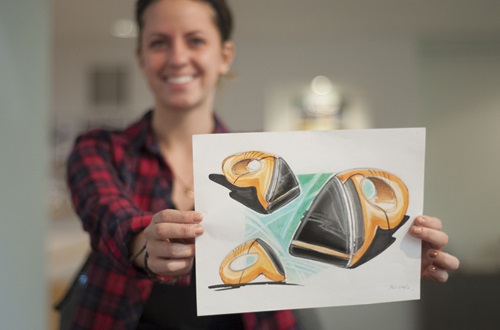