Thursday, June 20, 2013
David Ledbetter ’14 became the first Yellow Jacket player in 26 years to be selected in the 2013 Major League Baseball
First-Year Player Draft. He was chosen by the Texas Rangers in the third round as the 99th pick overall.

“This is an incredible opportunity, and I’m super blessed,” he said.

But there was more good news to come. The Rangers also drafted his twin brother, Ryan Ledbetter ’14, in the 19th round.

The Fishers, Indiana, brothers are both pitchers. David posted a 6-5 record with a 3.15 ERA this spring as the Great Midwest Athletic Conference (G-MAC) Pitcher of the Year. The 6-foot-1-inch, 185-pound, right-handed junior led NCAA Division II in strikeouts per 9 innings at 13.65. With 20 victories in his three years with the Yellow Jackets, he shares Cedarville’s all-time wins record with three other pitchers.

Ryan was 6-3 this spring with a teamleading 3.05 ERA. He struck out 59 batters in 56.0 innings while being voted to the G-MAC First Team. Ryan did not pitch his freshman season following Tommy John surgery, but in his next two years at Cedarville, he went 10-4 with a 3.16 ERA. Ledbetter Twins Drafted by Texas RangersAs the team’s closer in 2012, he posted a 4-1 record with six saves and a 3.34 ERA.

“This means a lot to our program to have one of our players selected in the Top 100,” said Cedarville’s Head Coach, Mike Manes. Despite losing two quality pitchers to the draft, Manes remarked, “I’m not sure it’s ever happened where twin brothers have been drafted by the same team in the same year. It will be a great experience for them to both get a chance with the Rangers.”

Both brothers are grateful for their experience at Cedarville. “It meant everything for me to play at Cedarville,” said David. “It’s more than just baseball — we’re here to represent Christ in our life and in our game.”

Ryan called his Cedarville career a one-of-a-kind experience. “I wouldn’t be where I am without Cedarville,” he said. “I appreciate the guidance the school gave me, especially from a spiritual perspective.”

The Ledbetters reported to Texas in June for assignments in the Rangers’ minor league system. David joined the Spokane Indians, the Rangers’ Class A short season affiliate. Ryan joined the AZL Rangers, their rookie team in the Arizona League. 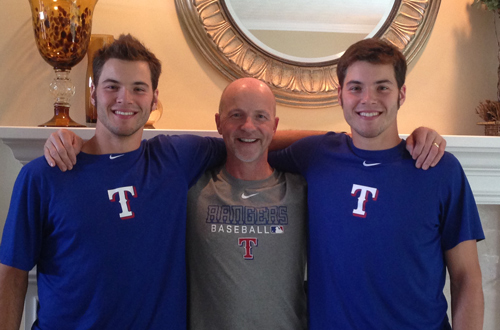 Ryan (left) and David (right) Ledbetter were drafted by the Texas Rangers in June 2013. The twins are pictured with their father, Ron. Photo credit: Ledbetter family.