Actor and director Matthew Wilson will perform his solo show, “The Great One-Man Commedia Epic,” at Cedarville University on March 15. His 8 p.m. performance in Alford Auditorium is free and open to the public, and a talk-back session will follow.

Wilson is an expert in Commedia dell’ Arte and has performed his show around the world since 2004. Commedia is a form of theater characterized by the use of masks, improvisation, physical comedy and iconic character types. The style began in 16th-century Italy and has influenced entertainment throughout global history.

In his one-man Commedia show, Wilson plays 12 characters and presents a classic story of young lovers. He argues, improvises and even duels himself onstage. The show’s tagline is “1 actor. 12 characters. 1000 catastrophes.”

Moore said Wilson’s show will help students understand an important art form, and workshops will allow them to gain as much knowledge from him as they can. “You can read about it in a book all you want,” Moore said, “but you understand by doing.”

Wilson is a certified stage combat instructor and will instruct theater students in swordplay as well as Commedia. Both of Cedarville’s upcoming theater productions, Molière’s “Tartuffe” and Shakespeare’s “Taming of the Shrew,” have strong roots in the Commedia tradition. 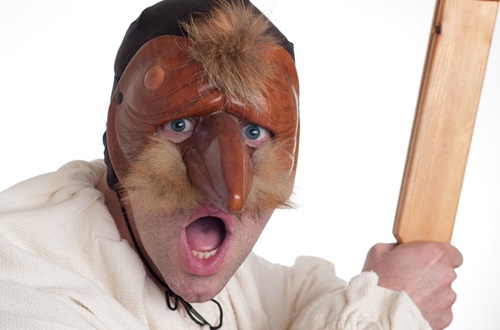 Actor and director Matthew Wilson will perform his solo show, “The Great One-Man Commedia Epic,” at Cedarville University on March 15. Photo by Clinton B Photography.