Graduates of the multi-age physical education (PE) major graduate with distinctive qualities, such as the ability to integrate their faith into lesson plans.

Teresa Clark, M.S., associate professor of kinesiology, has taught classes such as teaching elementary, teaching health, methodology and health and movement at Cedarville for 17 years. According to Clark, Cedarville’s PE major prepares students to integrate biblical principles into every aspect of teaching PE.

This aspect of the program impacted Josh Chasteen, a 2011graduate who teaches PE at Little Miami High School in Morrow, Ohio. Chasteen said that while at Cedarville, he learned how to integrate his faith in the classroom. “I get to spend eight hours a day with students who come from broken homes and families or are in legal trouble,” Chasteen said. “Many of these students don’t have a role model at home, so I can be a positive influence to them by living in a way that points to the Gospel.”

The quality and distinctiveness of students in the PE major is what stands out most to Kathy Freese, M.Ed., associate professor of kinesiology.

During Freese’s 22 years of teaching at Cedarville, she has found that combining spirituality and academic rigor produces graduates who love to build into the lives of their students.

“Cedarville students are distinctive. They genuinely care about the students they teach.  Ethically, they are strong and have a good foundation and love the Lord,” Freese said. “They’ve benefited from the hands-on experience they’ve acquired while here and are very qualified when they graduate.”

Kelsey Jones, a 2006 graduate, teaches physical education for kindergarten through 12th grade at Cedar Cliff Schools in Cedarville, Ohio. Jones said she always knew she wanted to be a physical education teacher, but didn’t have a passion for the profession until being inspired by her professors at Cedarville.

“They are awesome individuals. It’s been five years since I’ve graduated, and I am still trying to please them,” she said.

Jones said the professors at Cedarville comprehensively prepared her for her current position where she’s had to rebuild much of the program. “I’ve had to do a lot in my current position. I’ve even had to rewrite the curriculum,” she said.

Both Freese and Clark agree that almost all physical education graduates find jobs immediately after graduation because they refuse to limit themselves to a certain location. Instead, program professors encourage students to allow God to take them where He has great plans for them. 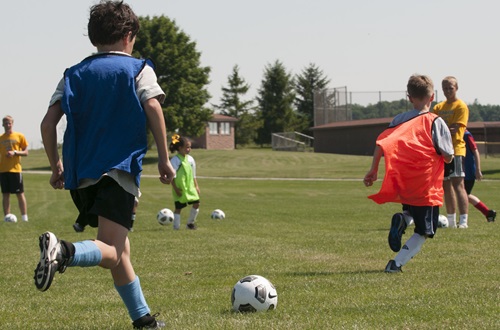