For brothers Jim and Tom Leightenheimer, their love for the outdoors brought them together as adolescents. When Tom passed away, Jim, an associate professor of communications at Cedarville University, decided to honor his brother’s life by walking, biking and paddling his way through southern Ohio.

Jim’s journey — dubbed “TomTrek” — was born out of his admiration for the way Tom lived and his courageous fight with cancer, as well as the brothers’ shared passion for outdoor activities.

Jim will launch TomTrek on June 10 by walking 28 miles from Cedarville to Washington Court House, Ohio. The next day, he will travel 30 miles by bike from Washington Court House to Yoctangee Park in Chillicothe. Jim’s longtime friend Jeff Sanders will join him to conclude the trek with a three-day canoe trip down the Scioto River to Portsmouth. After beaching, Jim and Sanders will make the short drive to Camp Oyo, where camp administrators plan to dedicate a totem pole to Tom’s legacy.

Tom passed away in September of 2012 after fighting a two-year battle with cancer. As a former Eagle Scout, Tom is remembered by family and friends for his love of Scout work. In fact, Tom founded the Camp Oyo Staff Alumni Association when the camp was at risk of being sold. The organization is dedicated to supporting Boy Scout Camp Oyo in Portsmouth, Ohio, and ensures that the camp will be open for future Scouts by raising funds and offering time and manual labor.

The Scouts aren’t the only ones who benefited from Tom’s legacy. Jim recalls Tom leading him on his first hike as an adolescent. “As my big brother, Tom invested a lot of time in me, and I’d like to see his investment leave a long-term mark on Oyo Camp,” Jim said. 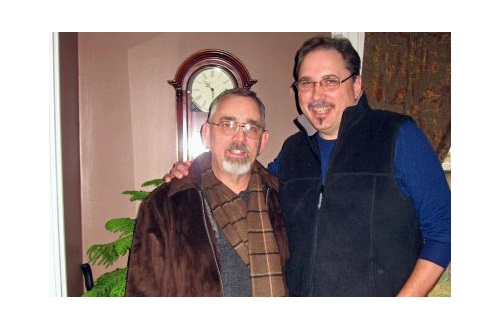