Senior Nate Franck changed his major 10 times before finding the perfect fit in Cedarville’s industrial and innovative design program. This year, his design skills and diverse studies helped him land an internship with Honda. Franck started studying architectural design at Montana State University in 2006, but he didn’t stay long. The same year, he returned to his hometown in Wyoming and tried six other majors at Laramie County Community College. Franck also studied civil and mechanical engineering at the University of Wyoming before coming to Cedarville University in 2010 as a mechanical engineering major.

Franck said none of these majors offered the variety he wanted. It wasn’t until his adviser at Cedarville pointed him to the new industrial and innovative design (IID) program that Franck stopped wandering and began to excel academically. The IID major is a collaborative program with the International Center for Creativity (ICC) in Columbus, Ohio. It started in 2010 and currently offers four study tracks: consumer product design, transportation design, exterior space design and interior space design.

Jim Stevenson, president of the ICC, said he wondered if Franck would stick with the program but soon noticed him spending a lot of extra time in the studio. He said Franck’s rapid progress demonstrated his strong work ethic and natural curiosity. "He's not afraid to let himself explore,” Stevenson said, “and that's a great characteristic for an industrial designer."

Stevenson said Franck is exactly the kind of person who excels in industrial design because of his combined interests in engineering and aesthetics. "The industrial designer walks right between the two," he said.

Students in the IID program spend their first two years on Cedarville’s campus, and then gain hands-on experience in the ICC studios in Columbus. They also benefit from the Center’s connections to major corporations. These connections offer opportunities for students to receive valuable advice and constructive criticism from professionals in Columbus, and they can also lead to jobs. Franck connected with Honda through a conversation at an ICC presentation last year, and his background in engineering set him apart as an ideal intern. “They were looking for someone to fill a very specific role,” Franck said, “and I just happened to fit that role.”

Franck said the IID major also offers the variety he was looking for. “We get to try new things all the time,” he said. “We never do the same thing twice.” In the future, Franck hopes to start his own industrial design firm so he can keep doing a little bit of everything. 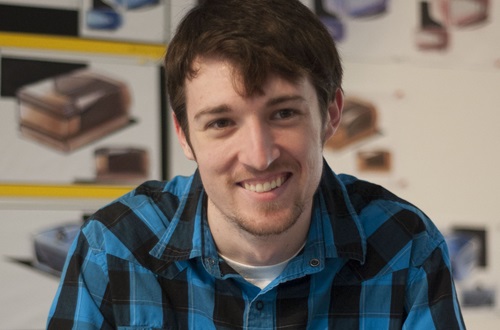