James H. “Pee Wee” Martin, a World War II veteran of the 506th Parachute Infantry Regiment, 101st Airborne Division, will speak about his experiences in the war at Cedarville University on April 20.

As a member of the 3rd Battalion G Company, Martin served closely alongside E Company, the brigade depicted in the hit HBO series “Band of Brothers.” In June of 1944, Martin’s division parachuted behind enemy lines in Normandy, launching the D-Day invasion that broke the German defenses and eventually resulted in the defeat of Germany.

Martin is one of the few surviving members of G Company. As an avid public speaker, he travels the nation to represent the 101st Airborne Division and preserve the legacy of World War II. Martin also plans to retrace his steps in Europe this summer for the second time.

Tom Mach, Ph.D., chair of the department of history and government, says this event provides a rare opportunity to hear from one of what Tom Brokaw refers to as the “greatest generation.”

Martin will speak in the Center for Biblical and Theological Studies Room 104 at 7 p.m. The event is free and open to the public. 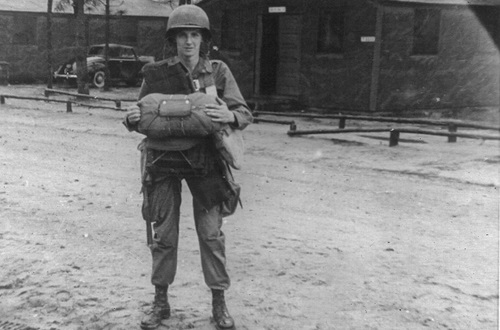