Monday, July 14, 2014
Industrial and innovative design (IID) graduates from Cedarville University have proven they have the ability to begin their career soon after graduating from the program.  Since the start of this program, which blends graphic design skills with engineering technology, 100 percent of its 2012 and 2013 graduates are using their skills professionally or are attending graduate school. The latest graduating class of 2014 is following the same trend.
Most recently, Sam Goodrow, from Flushing, Michigan, and Brendan Stivers, formerly of Brookville, Ohio, were hired by Honda Research and Development Design Department in Marysville, Ohio, after graduating in May 2014. They both offer fresh perspectives to the design of Honda vehicles in their positions in the Interior Trim Design Department.

“We were not taught simply how to do a job,” says Goodrow. “We were constantly challenged in our thinking, how to take the initiative to learn something new. The IID program at Cedarville is about equipping students to become the best professionals they can be.”


Two other recent graduates have also found immediate placement in their field. Seth Maxwell, from  Sellersburg, Indiana, was hired at Reebok International Design Studio, in Boston, Massachusetts, among thousands of applicants, and Elena Goodale, from Colleyville, Texas, is completing her second paid internship in August with Mercedes-Benz in Carlsbad, California. Her first internship with Mercedes-Benz was in Australia.


The success of the program is evident as students have found jobs across the country. “Watching our students excel is a testament to their commitment toward excellence and honoring God with their work,” said Terry Chamberlain, chair of Cedarville’s department of art, design, and theatre, which houses the IID program. “It is very rewarding to see the students graduate with a strong portfolio of work and gain meaningful employment so quickly.”

The industrial and innovative design major launched in 2010 and is the only one of its kind among the Coalition of Christian Colleges and Universities. Cedarville partners with the International Center for Creativity in Columbus, Ohio, to offer the collaborative program. Students spend their first two years on Cedarville’s campus and then spend their remaining two years in Columbus to gain “hands-on” experience in studio classrooms. There are currently four tracks of study offered to IID students: consumer product design, transportation design, interior space design and architectural and exterior space design. 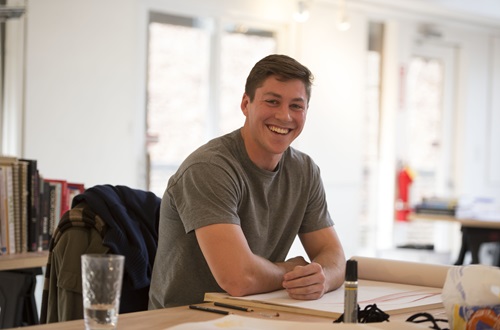 Industrial and innovative design students have proven they have the ability to begin their career soon after graduating.