Cedarville has experienced record enrollments in each of the last four years. With enrollment high, the university wants to continue that momentum by sharing its story to key audiences across the nation. The strategy, which began last November and resumed earlier this month, is helping with student inquiries for 2014-15. Currently, Cedarville has more student interest at this point in the year than at anytime during the record-setting years.

The first blitz campaign took place in November 2013, and now there are six teams traveling throughout the country in February and March. In total, more than 100 schools and churches will participate in the program between Feb. 3 and March 7 — a total of close to 5,000 miles.

“The blitz campaign has been successful this year because we’ve been able to connect with church and school leaders who understand the value of a truly Christ-centered education,” said Bruce Traeger, director of church relations and the coordinator for all of the trips.

Below is a list of areas where the blitz teams are traveling: 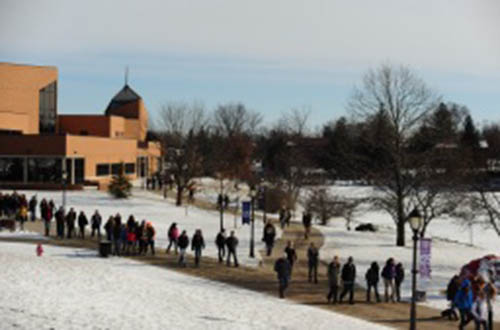