Racing in supermileage car competitions has been the norm at Cedarville University since 1991. In these competitions, first with SAE (1991-2010) and now with Shell (since 2007), the teams of Cedarville engineering students have gained practical learning knowledge while winning awards in the process.


In each competition, the goal is to build a car that will travel using the lowest amount of energy.

Cedarville will be competing at the Race of the Americas on April 25-27 in Houston, Texas. Shell limits the race to 125 teams and the competitors come from North and South America, including Latin America. In 2013, the two prototype teams sent by Cedarville University placed first or second among any university from the United States with its “Gold Lightning” car (first) and “Sting” car (second).

According to Larry Zavodney, Ph.D., senior professor of mechanical engineering, Cedarville will return its “Gold Lightning” and “Sting” vehicles this year. Gold Lightning, a vehicle using regular gasoline, achieved 1,391.5 miles per gallon (MPG) last year and was the highest ranking U.S. college car in the competition. Meanwhile, Sting, a vehicle using battery electric with solar cells, generated 280 miles per kilowatt hour to place second among U.S. universities. Prototype cars are mostly three-wheeled vehicles that are low to the ground and are without a steering wheel, external mirrors. In the prototypes, the driver lays down to drive.

Cedarville’s newest car, “Urbie” has not yet competed in a race. Two years ago, Urbie was registered in the urban concept design category but did not get through inspection. Last year the car passed the inspection phase but broke down during the race and did not finish. Urbie, which looks like actual car on today’s roads because it has four wheels, a steering wheel, turn signals, brake lights, headlights, mirrors, and windshield wipers, is expected to do well in the competition.

Students in the engineering program at Cedarville have been competing and designing innovative, fuel-efficient vehicles since 1991. “It’s an application of engineering fundamentals,” Zavodney commented. “We teach the students the value of energy resources and how to conserve them.” 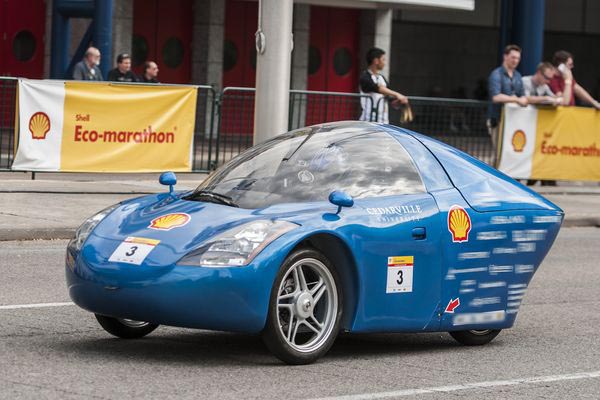