According to last year’s U.S. News and World Report college ratings, Cedarville University ranked as the fifth-best college in the Midwest. In a report out earlier this week from Washington Monthly, Cedarville ranked #15 nationally—and is the highest ranked baccalaureate university in Ohio. These endorsements reflect why Cedarville is expected to have a fifth consecutive record enrollment this fall, and with a strong national presence and Cedarville’s commitment to a Christ-centered education, the new campaign fits perfectly with its goals and mission.

The campaign was developed by Cedarville’s marketing team, led by Chad Jackson, director of marketing and creative director, and Janice Supplee, vice president of enrollment management and marketing.

“This ad campaign fits who we are as an institution and what we are seeking to build into the lives of our 3,400 students,” said Supplee. “Cedarville is bold about offering academic excellence and a biblical worldview in our classrooms. We are bold about standing for what the Bible says, even when it's not popular. We are bold about equipping our students to be outstanding in their professions and intentional about sharing and living out their faith.”

The campaign, much like last year’s, will use digital radio—Pandora, iHeart Radio and targeted web advertising−to reach a national audience. It will also use targeted radio stations in Dayton, Columbus, and Cleveland to help the University strengthen its home base with an aggressive campaign.

“We are investing a great amount of time and financial resources into the ‘Be Bold’ advertising campaign, and I believe our strategies will prove to be wise and strategically position us to achieve our desired results,” said Mark D. Weinstein, executive director of public relations.

Last year Cedarville initiated its first national campaign, “Calling and Conviction,” and gained measured success. The campaign generated close to 300 leads of prospective students, but it significantly increased Cedarville’s name recognition as 48.3 percent of the target audience was made aware of Cedarville University for the first time. 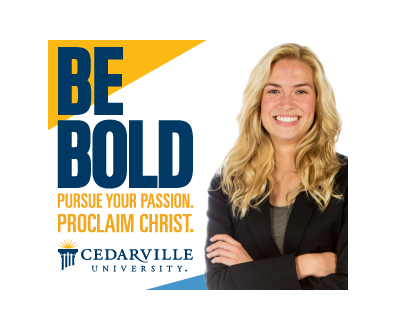