Wednesday, February 12, 2014
Zachary Young, a 2013 graduate of Cedarville University, earned first place at the American Society of Mechanical Engineers (ASME) Old Guard Oral Competition held in San Diego, Calif. Students from throughout the world competed in this competition, including students from universities in the United Arab Emirates, the United Kingdom, India, Columbia and Mexico as well American schools such as the Milwaukee School of Engineering and Yale University.

For the competition, each student prepared for a 15-minute technical presentation and five-minute question-and-answer session on an aspect of engineering, preferably about something they themselves were directly involved in. Zach presented on his senior design team’s project, which involved collaboration between Cedarville’s engineering department and the school of pharmacy. His team, led by its faculty advisory Dr. Timothy Norman, developed and built a device for use in pharmaceutical research that allows scientists to perform research on cells and have the cells respond as if they were still in the human body.

According to Young, Cedarville’s engineering program was foundational in preparing him to present in this competition. “It gave me the technical fluency to fully comprehend all the facets of the project, the confidence and mannerisms to ensure my delivery was clear and not distracting and the critical thinking required to quickly and concisely answer all the questions asked of me.”

Cedarville’s engineering faculty believes that proper communication and public speaking skills are nearly as important as the concepts of engineering themselves. The many reports and presentations assigned through the first three years of the program have proved to be invaluable to students like Young.

Contending in this competition also proved to Young that the education he received at Cedarville was truly excellent. “The main thing I learned there was how world class Cedarville’s engineering department is. Here I was, an average Cedarville student, competing against students from huge research institution, Ivy League schools and schools from across the world,” said Young.

Young is currently preparing to start work for Northrop Grumman in its Profession Development Program. 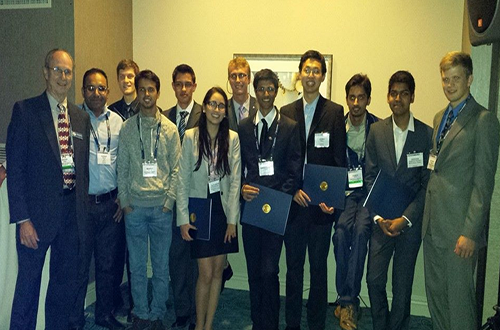