Six Cedarville University graduates now have the opportunity to reach an audience of thousands with the gospel message through their work at a Columbus radio station. A Christian radio station with a mission to make an impact in the community, 104.9 The River is currently number three of all radio stations in the Columbus market.

Although each graduate began working at 104.9 The River at different times, most of them found out about the opportunities at the station through recommendations from the previously hired alumni or from Cedarville faculty.

Craig Bennington, a 2003 graduate who is national sales manager at The River, was the first to be hired in 2003 and started as an intern before being offered a full-time position. Also, Scott Thomson, chief financial officer and 1997 graduate, was hired in 2005 after being recommended by Dan Baughman, president and CEO of The River whom he had previously worked with at Mettler Toledo.

Todd Stach, a 1994 graduate, serves as chief creative officer and started as a morning show co-host in 2006 after working for other radio stations across the country. In 2008, Stach contacted Bill Montgomery, a 1993 graduate who had also worked at a few other radio stations in Columbus and Seattle, about a position at The River. Montgomery now works as the chief sales officer at The River and also as an adjunct faculty member teaching electronic media sales at Cedarville.

Montgomery later received a recommendation from associate professor of communications Jim Leightenheimer for Dave Stephens. In March 2012, Stephens, a 2009 graduate, accepted a position in donor relations at The River. Laura Gabbert, a 2012 graduate, joined the staff as web designer three months later thanks to Stephens’ recommendation.

All of the graduates from the broadcasting program agreed that the education they received at Cedarville through the excellent faculty members was crucial to their success. “Wes Baker and Jim Leightenheimer were an integral part of learning and pushing real-world experience,” said Stach.

Many of the graduates were also heavily involved in student radio, either on-air or in production.

According to Stephens, the most important element to his success was the integration of faith and knowledge at Cedarville “The solid education in the broadcasting field, and also the integration of a Christian worldview and our faith with whatever field we are in, proved to be crucial in preparing these alumni to work in Christian radio,” said Stephens. 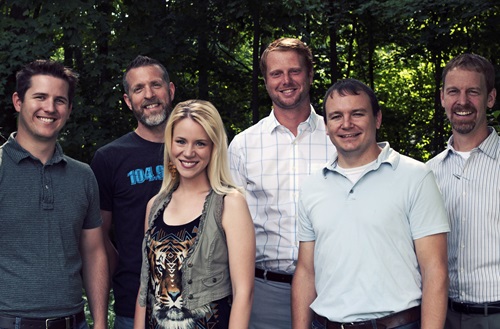