Wednesday, November 6, 2013
On Nov. 11, Cedarville University will honor and recognize seven local veterans during its annual Veterans Day chapel at 10 a.m. in the Dixon Ministry Center.

Some of the veterans are former residents of Cedarville, some graduated from Cedarville University and others are connected to the community through their families. The seven represent service men and women from six American wars, giving their time, health and, for some, their lives to protecting America’s freedom.

Hugh Turnbull was born and raised in Cedarville and graduated from Cedarville College. In 1917, during the first World War, he enlisted in the Army at the age of 25, arriving at his post in Libourne, France. There he served with the 33rd Coast Artillery Brigade for 14 months before coming back to the United States, where he was discharged. He returned to Cedarville, got married, became a farmer and started a family. He was an active member of the community until his death on January 7, 1984, at the age of 91.

Earl Miller joined the Air Force at the age of 22, shortly after the bombing of Pearl Harbor during World War II, and flew B17s for the Air Force. He was stationed in southeast England and flew 25 missions in five months over Germany and France in 1943. At the time, there was a 6 percent survival rate among pilots in his position and, though Miller did not expect to make it home alive, he returned safely and was awarded the Distinguished Flying Cross, the Air Medal and a Three Oak Leaf Cluster. Miller is a devoted Cedarville University donor, and one of his sons, Chris, now serves as a senior professor of biblical studies at Cedarville University.

Cliff Johnson was born in Sweden and, as a child, immigrated to Canada and then the United States with his family. He began college intending to become a chemical engineer, but during his first year, enlisted in the Army to fight in World War II as a night fighter pilot. Johnson was stationed in the Philippines and flew the P-61 "Black Widow" as part of the 419 Night Fighter Squadron in the 13th "Jungle" Army Air Corp. After serving, he returned to his education, this time pursuing teaching. He was invited to join the faculty of Cedarville College by its president, James Jeremiah, and began serving in 1962. He continues to act on behalf of Cedarville University and serves as a Sunday school teacher and usher at Grace Baptist Church. He has been an active member of the 13th Air Force Veterans Association for the past 10 years.

Jay Womack grew up in a military family in Kentucky and enlisted in the Air Force in 1951, during the Korean War, at the age of 21. He eventually became a Buck Sergeant and worked at the Carswell Air Force Base in Ft. Worth, Texas, as an electrician and repairman to support the Eighth Air Force. After serving for four years, he returned home, got married and, eventually moved to Cedarville, where he worked as an auto mechanic and repairman until his retirement in 2007.

John LeBlanc enlisted in the Air Force in 1965 at the age of 20 and was assigned to the Luke Air Force Base in Phoenix, Ariz. He and his wife lived there for a year before LeBlanc was deployed to Vietnam. There he served as a sergeant with the Air Force’s 3rd Field Maintenance, overseeing field training and supplies. Some of the war’s worst fighting, the TET Offensive, took place while LeBlanc was serving, and for 62 straight days, his bunker was under constant nightly fire. He was awarded the Bronze Star, among other awards, for his service. He now serves as an associate professor of management at Cedarville University.

Brett Newman joined the Marines in 1985 at the age of 18 and served for 20 years. He served on the USS Nimitz, in the Persian Gulf, in Mogadishu, as part of the 5th Marine Regiment in Baghdad and in the United States as a recruiter and trainer. During an assignment in Ramadi, Iraq, with the 4th Marine Regiment, Newman was ambushed twice, which resulted in a broken back among other injuries. He then moved to Tampa, Fla., where he recovered before retiring from the Marines. A love of sports prompted him to begin coaching, which eventually brought him to Cedarville University, where he served as an instructor and basketball coach. He now works as the athletic director at Emmanuel Christian Academy in Springfield.

Jennifer Matthews Anderson was a 1986 broadcast journalism and political science graduate from Cedarville University. She and her husband, another Cedarville graduate, moved to the Washington, D.C., area in 1989, where she got a job as a CIA intelligence analyst. In 2009, Anderson began working to track down al-Qaeda leaders as the chief of forward operating at Base Chapman in Khost, Afghanistan. On Dec. 30, 2009, Anderson was killed along with six others in a terrorist attack. Anderson and her role in the incident were included, somewhat controversially, in the 2012 film “Zero Dark Thirty.” Anderson was named Cedarville University’s 2012 Alumna of the Year.

Cedarville University will hold two special events on November 11 to commemorate and honor these veterans and all others who have served the nation. A special chapel service will be held at 10 a.m. in the Dixon Ministry Center Jeremiah Chapel and will include patriotic music from the symphonic band, massed choirs and a quartet. University students will give presentations honoring Turnbull, Miller, Womack, LeBlanc, Newman and Anderson. All veterans are invited to come to the service, where they will be honored and recognized. A second event will host and honor Johnson as he shares his experiences from his service during World War II. This event will take place at 7 p.m. in the Center for Biblical and Theological Studies in room 104. Both events are free and open to the public. 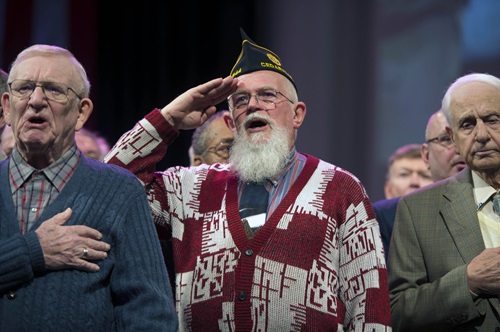