Thursday, November 7, 2013
Students at Cedarville University hear their share of jokes about getting a “ring by spring” and the “MRS degree.” But beyond the stereotypes, a recent report from the Facebook Data Science Team ranked Cedarville among the top 10 colleges where male students meet their spouses.

The report, “Classmates to Soulmates,” examined data from all U.S. Facebook users over 25 years old who listed their spouses and colleges on Facebook. Overall, 28 percent of married college graduates shared the same college. For Cedarville, 58 percent of married, male graduates had married other alumni.

Thomas Hutchison, professor of Christian education, said this statistic surprised him because he has not seen a strong pressure for marriage at Cedarville. Hutchison has been at Cedarville since 1995 and said he wonders if students are driven by expectations they arrive with rather than the campus environment. “A lot of people come with an implicit expectation that they will find someone,” Hutchison said.

Mark Irving, director of discipleship ministries, said relationships at Cedarville are unique because students share the same faith. “Cedarville students have so much in common in how they view the world,” he said. With few commuters, Irving said the campus also fosters a close-knit community and offers many opportunities for social interaction.  “Marriage is on people’s minds at this age,” Irving said. “So you put them out in the middle of the cornfields together — and they share the same vision in life — and it seems to be a natural result.”

In the Facebook study, most of the top-ranked schools have religious affiliations, and only one —Brigham Young University, with 52,000 students — has a student body over 6,500. The report did not list Cedarville among the top 25 schools where women meet their spouses.

When Cedarville students want to marry, Irving said he thinks the University supports them and helps them build a strong foundation for lifelong commitment. Irving directs Fit to Be Tied, Cedarville’s premarital counseling program, and said about 50 couples participate each year. Hutchison also mentors couples in the program. 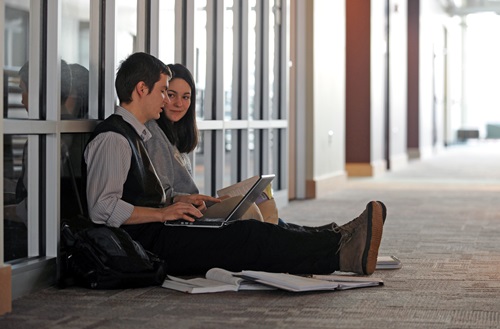